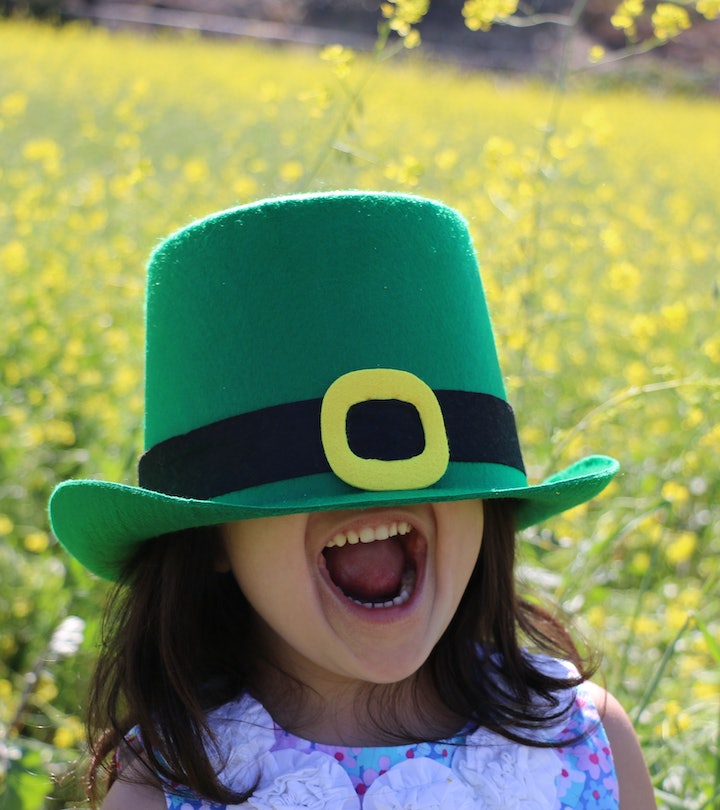 How To Explain St. Patrick's Day To Kids

It’s not just about leprechauns, wearing greens, and chasing rainbows.

The month of March doesn’t have a whole lot of holidays to celebrate, sans one — St. Patrick’s Day. Come March 17, many feel inspired to get their emerald-hued clothes and accessories on and participate in all the fun and festivities of the holiday. But there’s a whole lot more to the day than parades and parties. If you’re stumped to answer even the basics of the day, here’s how to explain St. Patrick’s Day to your kid — because it’s not just about wearing green.

For little kids, figuring out how to celebrate St. Patrick’s Day with toddlers, preschoolers, and kindergarteners isn’t too much of a stretch. You put out some green frosted cupcakes, dress the kiddos in lime-colored clothing, go to a parade (or watch one at home), and make a leprechaun trap. Easy peasy. But it’s as children get older that they might start asking questions, like “Who the heck was St. Patrick, anyway?” or “And why are people drinking green beer in his honor?” (You get the point.) And that’s when having some information on the holiday can help you not only educate both you and your child, but make the holiday more meaningful.

Each family might choose to celebrate the day differently. Some might take the opportunity to feast on the foods of the Emerald Isle, while others might break out some books and learn more about famed Irish writers and poets, like William Butler Yeats. However you choose to celebrate, take some time to explore the true meaning of the holiday, and why it’s so important to Irish people everywhere. And if your child asks you any of the following questions, you’ll know how to answer them.

St. Patrick is the patron saint of Ireland. Interestingly enough, Patrick wasn’t his real first name — historians believe that it may have been Maewyn Succat, and that he adopted the name Patrick later in life while he worked as a Christian missionary, per Biography.com. He’s credited with helping spread Christianity throughout Ireland.

But hold onto your four leaf clover, because here’s the kicker. The patron saint of Ireland wasn’t Irish. That’s right, St. Patrick was…British. He became a slave of some Irish raiders, and spent many years in captivity, during which time he honed his faith.

“Is St. Patrick’s Day the day we celebrate his birth?”

Errr, not quite. Actually, March 17 commemorates St. Patrick’s death, sadly. Ironically, not much is known about his death; even the year when he passed away is up for debate, Irish Central reported. While some say that it was in 493 AD, it might have been in 461 AD, which would have made him around 76 years-old.

Welp, no, actually. St. Patrick’s Day is not a federal holiday in the U.S. In Ireland, though, it is a public holiday, which means schools and offices are closed (but bars, ahem, are open). So you’ll have to inform your kiddos that it’s a holiday that will probably have to be spent in school.

“Why do we wear green on St. Patrick’s Day?”

Well, Ireland is known as the Emerald Isle, with green hills and grass for as far as the eye can see. But when the shamrock became a national symbol of Ireland, the color became synonymous with the island country, per National Geographic. And of course, the flag of Ireland has one green stripe. So to honor the country, people will wear green outfits.

But that’s not the only reason to wear a verdant ensemble. It’s thought that St. Patrick used green shamrocks to teach the Irish about Christianity and the Holy Trinity (think each leaf representing God the Father, God the Son, and God the Holy Spirit), per Readers’ Digest.

And if all that weren’t enough, the main reason to wear green is so you don’t get hurt — literally. Apparently, leprechauns like to pinch people who don’t wear green, and wearing the color makes you invisible to them, according to , Real Simple.

“Why do people drink alcohol on St. Patrick’s Day?”

So, there’s a real reason why the Irish (and those who are Irish on St. Paddy’s Day) like to imbibe a bit on March 17. You see, the holiday always falls smack dab in the middle of Lent, when Christians typically give up indulgences like alcohol for the 40 days before Easter. But St. Patrick's Day is such a big deal in Ireland that the Lent restrictions are temporarily lifted, which leads to people having a really good time with beer (sometimes green) and great food (also sometimes green), Total Wine reported. Bonus points if you end your answer by sliding over a huge helping of corned beef and cabbage.

“What do leprechauns have to do with St. Patrick?”

It would seem that small, supernatural (and ack, snarky) fairies wouldn’t have much to do with the man credited for bringing Christianity to Ireland. But on St. Patrick’s Day, the Irish folklore of leprechauns is almost as important as the patron saint himself. The leprechaun has been known to be an old man who works as a shoemaker, (via Live Science), but don’t be fooled — they are total tricksters.

The good thing about explaining St. Patrick's Day to younger kids is that there's plenty of talk about magic and fairies to keep them interested. They guard over pots of gold, and catching a leprechaun is supposed to be great luck, since it also means catching his treasure. But basically, leprechauns are a part of the holiday since they reflect the Irish culture, they’re fun, and they encourage people wear green.

“But we’re not Irish. Why do we celebrate St. Patrick’s Day?”

Everything about March 17 — from the food, to the fun accessories, and the parades — invites people of all ages to join in and have a great time without issues such as race or religion to contend with. It’s also an opportunity to learn something new.

Explaining St. Patrick’s Day to kids isn’t as difficult as it might seem. Brushing up on some of the basics can answer most of your kid’s questions. And best of all, you get to eat and drink everything green together until, well, you’re all green, too.

This article was originally published on March 17, 2016