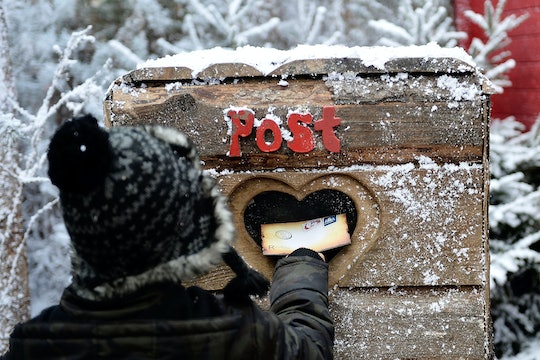 Kids can even receive a reply back from the big guy himself.

Around this time of year, millions of children write letters to Santa, ensuring those bids for toys are submitted in writing. It's smart, really. Many kids put a lot of thought, time, and effort into crafting these messages, too. When your kid finishes this important letter, then you still need to make sure it reaches jolly old St. Nick himself. That's when it's handy to know where to drop your letter to Santa off in time for the holidays. Fortunately for busy parents everywhere, there are many ways to get your post to the North Pole.

Where Can Kids Mail Letters To Santa?

For starters, the United States Postal Service looks like it's pretty tight with Santa. In fact, if your kid sends a letter to Santa by December 10, then there is a good chance you will get a personalized response from Santa back, according to the USPS. The exact steps to follow are outlined on the USPS website, and it will cost you a stamp, but your kid will receive a letter in the mail postmarked from Santa’s helpers in Anchorage, Alaska (the closest place within the U.S. you can get to the North Pole) which is pretty dang cool. Best of all, these letters can be sent from any mailbox, anywhere, so you won't have to make any extra trips to get the message sent.

Next, there is another way to mail Santa a letter and get a response back from the Arctic Circle. Simply mail a letter to Santa Claus' Main Post Office, Tähtikuja 1, 96930 Arctic Circle, FINLAND, and your kid can get a response back with the awesome Arctic Circle postmark. Your whole family can enjoy this international and unique holiday tradition, which just might kick off an interest in collecting cool stamps and letters from around the world.

Where Can You Drop Off A Letter For Santa In Person?

If you are going to the mall anyway, then you may want to swing by the department store Macy's. Several locations have a big red mailbox especially for letters to Santa. By dropping off a letter in the R.H. Macy’s Santa Mail Box, not only will your child's letter get to Santa, but their letter will count toward a $1 donation from Macy's to Make-A-Wish, according to the retailer's website. If you are pressed for time, there is an email option on the site as well. Hey, even Santa had to embrace technology at some point. Overall, though, the Macy's letter to Santa program is one way to help your kids get involved in the habit of giving back for the holidays.

In addition to these big players in the Santa mail game, you may want to search for more local opportunities to mail out those letters. I would start with your local library. A quick search reveals several cities have libraries that participate in Santa letter drop offs. For instance, the public libraries in Kenton County, KY offer designated mailboxes to mail Santa letters, and those sent before Dec. 13 will even get a personalized reply. Consider visiting your own local library to see about similar programs, and maybe check out some holiday books while you’re there.

Other local shopping centers, toy stores, and malls are good places to check out for Santa mail drop off locations. For one, Cambridge Market shopping center in Wichita, KS has a mailbox specifically for letters to Santa that will get a reply if dropped off during the first two weeks of December, according to the blog Wichita Mom. Check your local shops for similar offerings.

Whether you drop your letter in a special location, or have the postman pick it up from your own mailbox, you and your kids are taking part in a tradition millions of children have enjoyed for decades. This activity with a handwritten letter will create holiday memories that will last your child a lifetime so cherish these moments while you can.

This article was originally published on Dec. 3, 2017