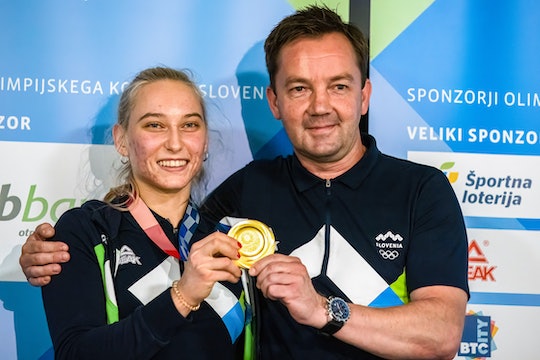 Do Olympic Coaches Get Medals, Too? Here's The Truth About Their Awards

Athletes train their entire lives to compete in the Olympics, but they don't do it alone. Which is why it's totally reasonable to wonder whether or not the 2018 Olympic coaches get medals, too. Despite all the hard work and sweat equity they have with their athlete or their team, the International Olympic Committee does not award medals to coaches, although some countries do hold separate medal ceremonies for their coaches, even if they don't make it up there to the podium.

Why Don’t Olympic Coaches Get Medals?

It's sort of odd that Olympic coaches don't get medals, since here in the U.S. coaches whose teams compete in championships like the Super Bowl or World Series also get to take home a ring with them, just like the players. Although the coaches are usually not front and center at the award ceremony, American athletes can give the Order of Ikkos to their coaches or other person who has significantly helped them throughout their athletic career, according to the Team USA website.

If the Order of Ikkos sounds ancient, because it's named after the first ever Olympic coach back in Ancient Greece, but the award hasn't been around that long. It was founded in 2008 by the U.S. Olympic Committee just before the Beijing games. The medal is awarded at a special USOC ceremony after the Olympics are over.

Can Olympic Coaches Ever Get Medals?

However, in very rare circumstances, coaches can get medals from the IOC. Herb Brooks received one in 1980 at Lake Placid after he coached the U.S. ice hockey team to victory against Russia. The IOC keeps extra medals on hand just in case of a tie and since it was such a huge upset at the time, the committee thought Brooks deserved one. But that was a rare case.

Although it might not be for long. One of the issues with giving coaches medals is that it's hard to know if just the coaches should get one, or if other training staff should to, like the physical therapist or someone else who meaningfully supports the athlete or team. Also, it's hard to figure out how to distribute the medal. Say, for example, if Lindsey Vonn wins multiple events, would her coach get a medal for each singular one or just one for each year?

Likewise, since players on a team all get a medal, would a coach get one just for the team or could it claim multiples if the whole basketball team wins? See — it's not as simple as it sounds, right?

To solve this problem, French designer Philippe Starck designed a medal for the 2024 Summer Olympics in Paris and it's a great idea. The medal looks like the standard gold, silver, and bronze ones, except that they can be divided up into four pieces. So an athlete can give a piece to the coach, the trainer, their mom, their dogwalker — whoever they feel most deserved a piece of their win. Starck explained that in a video on the Paris 2024 Twitter account;

Normally a medal tends a sort of witness, a message that says, 'I was there, I did it, I outdid myself. I went beyond myself. I won. It is extraordinary. But today more than ever, the truth is that you’re not winning alone. So I wanted this medal to reflect that. If the winner wants to share it, he can share it.

"It’s a really nice way of truly showing team spirit," he added. It's about time that the whole squad got a little recognition for all their hard work with a medal. Although the athlete is the one barreling down the slopes or landing the triple axel, it's always a team effort.

This article was originally published on Feb. 11, 2018