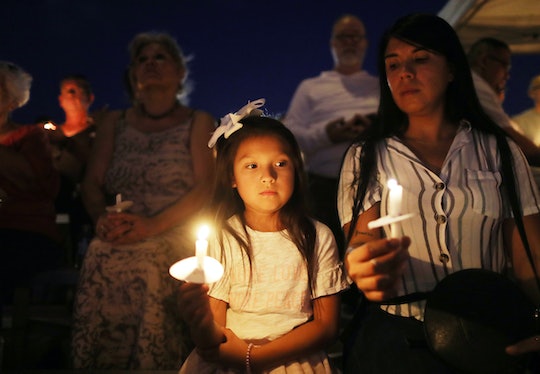 When Columbine devastated the country in 1999, it felt wildly unusual, shocking, rare. Over two decades later, we’ve cried through Sandy Hook, Tree of Life, Charleston, Buffalo, and countless more mass murders. The world is different, and talking to children about gun violence and horrific shootings is now part of every parent’s job. To date in 2022, there have been 27 school shootings and 212 mass shootings in the United States. It’s not even June.

Whether it be a tragic accident in which a child shot and killed their sibling while playing with a gun found in the house, or the recent massacres in Buffalo, New York or Uvalde, Texas that left a collective 31 people dead, the upsetting images on television or social media are impossible to miss. Watching the coverage of shooting after shooting can be emotionally draining for anyone, especially a parent whose first thought will always be, “That could have been my child. That could have been my family.”

After Tuesday’s horrific massacre in Uvalde, we still had to send our children to school and childcare the next morning. Parents across the country reminded their kids of the lockdown drills their school had completed and kissed them extra hard. Some kids scampered off to class like any typical day, while parents once again felt the world tilt recklessly on its axis as we faced another senseless mass shooting. Other kids left with apprehension and fear. And across the country, teachers had to grapple yet again with how to address gun violence and murder with their confused and scared students.

Should parents try to shield children from horrific news?

Limiting media exposure in times like this is important. The Los Angeles Times reports, “Violent images can cause secondary trauma.” The outlet also notes that for younger children:

“Every time they watch the news, they feel like it’s a new event as opposed to repetition of the same event. It’s important for them not to watch too much,” Carol Vidal, a child and adolescent psychiatrist at Johns Hopkins University, told The Times in 2019.

But should you try to keep them from knowing anything about the latest shooting? It’s tempting, but, as Dr. David Schonfeld, the Director of the National Center for School Crisis and Bereavement, points out: “If this is something that is in the news and people are talking about it, children will pick up on it.”

Kids are looking for someone to listen to them, not someone to tell them all the right things

“I don’t think we have to tell children about everything bad that happens, at any age, but if they’re going to hear about it then I think we should at least explain,” says Schonfeld. Your little one may not have noticed the radio news report on the recent shooting while you drove them to daycare. But once they’re among friends, it might come up in conversation. Schonfeld explains that peer interaction and social media are where a lot of children tend to get their information, and more often than not it can be wrong.

Further, attempting to completely shield your kids from graphic news could give off signals that it’s not okay for your children to talk to you about that difficult subject. Kids are looking for someone to listen to them, Schonfeld explains, not someone to tell them all the right things. “And we want them to know that the adults that they trust in their lives — their parents, their teachers — are there if they want to ask about something.”

Start the conversation by asking questions.

The best approach is to first ask your child if they heard anything about the violence in question and, if so, what exactly they heard, says Schonfeld. Once you know what your child knows, he suggests parents use simple terms to explain what happened, or correct any wrong information they may have. Reassure your child that adults in their life are doing the best they can to assure they are safe, and that you are there if they need to talk.

With more mass shootings than the number of days that we have had so far this year, the world can feel scary. Adults often struggle with why things happen, and those thoughts could be heightened for a child, which creates a difficult task for parents.

Maureen Healy, the author of The Emotionally Healthy Child, explained that there is no “cookie-cutter algorithm that can be applied to every parent or lifestyle.” Healy, who holds a PhD in Child Clinical Psychology from the Fielding Graduate University in Santa Barbara, California, says that being honest with your kids and making sure not to overshare is important for them to feel secure. “Be careful not to increase your child’s stress and focus on the progress being made and protocols at their school which ensure their safety,” says Healy.

Even very young children can pick up on their parents’ emotions. “An infant isn’t going to know what’s happening and understand it,” Schonfeld says, “but they will still respond to the distress of a close adult in their life.”

If a toddler sees you crying, for example, Schonfeld says that parents should take this type of opportunity to be a positive role model and exercise good coping mechanisms. You can say something like, “Mommy is sad because people got hurt. I am okay though. Let’s go play with your farm puzzle.” It is important to show natural human reaction, but also important to demonstrate positive coping tools.

Taking action is another way of coping — show yourself, and your children, that it is possible to make change, that some things are worth fighting for, even if it can sometimes feel hopeless.

After you have explained things to your child, be sure to be on the lookout for any signs that they are not coping well. Healy explains warning signs could include problems sleeping when previously there were none, as well as excessive crying or outbursts with no known trigger. “These are signs a child doesn’t yet know how to handle his or her big emotions, and needs extra support,” says Healy.

When a reaction seems oversized or unusual, Schonfeld says it could be due to a different, underlying issue — or it could be bringing up grief from a child’s past, like the loss of a beloved grandparent. “Sometimes kids and adults will react to some events, but they’re not really reacting to the event itself,” he explains, “So if it seems to be a disproportionate reaction, there is probably something else going on.”

Talking to your children about such heavy topics like mass shootings can be overwhelming. Experts stress that parents should be prepared before talking to their children. Collect your thoughts and feelings before you approach your child about theirs. If you or your child are having a hard time, please reach out to your primary doctor or look into other resources for help.

Dr. David Schonfeld, Director of the National Center for School Crisis and Bereavement

This article was originally published on Aug. 26, 2019