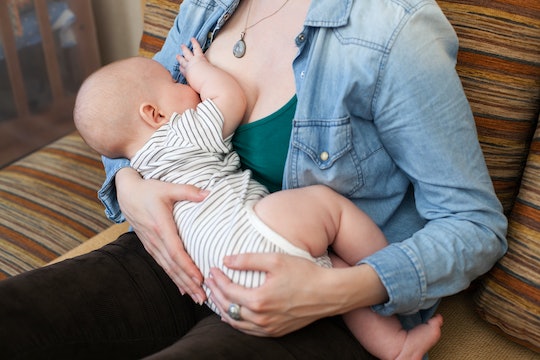 10 Mistakes Every Weaning Mom Will Make

I've complained about this before and I'll complain about it until I see improvements: weaning moms get no love. Even among breastfeeding parents, in my experience, it's not a subject that's discussed all that much and, as a result, there are mistakes every weaning mom will make.

It's not like weaning moms are some niche group here, people. According to the CDC, 80 percent of moms who give birth breastfeed for at least some amount of time. This, of course, means most moms will also have to deal with weaning. And the issue isn't as cut and dry as "just stop nursing," either physically or emotionally. There's a lot to deal with, figure out, and consider when it comes to deciding to stop breastfeeding, and a lot of people don't even know to ask about them.

I weaned my children at 17 and 21 months respectively, and the process was mostly just a series of missteps and lucky guesses. The plethora of materials I'd turned to in an attempt to acquire some help with breastfeeding largely came up lacking when the subject of weaning came up. Part of this was a lack of information, and part of it was a bias from (some) otherwise excellent against parents being the one to start the weaning process — they often spent more time encouraging parents to allow their child to self-wean whenever they were ready than providing guidance.

Frankly, it's super disheartening to go out into the wilds of the internet to say, "Hey, there's this thing I know is right for me and I would like some help with," only to have the internet respond either, "Are you sure? You're probably not sure. Just forget about that" or "New phone, who's this?" So what are some of the pitfalls I would have loved to have avoided (or at least had someone to hold my hand through)? So many, my friends, including the following: