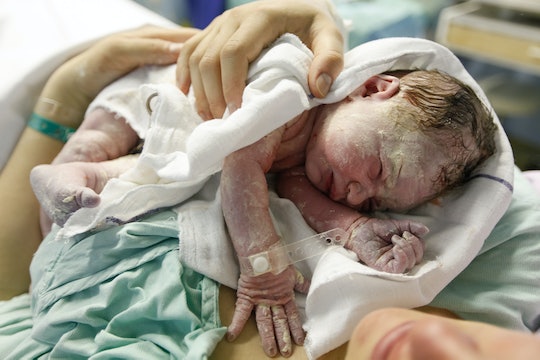 10 Reasons Newborns Are The Most Terrifying Humans On The Planet

The whole notion of zombies both fascinates and scares the hell out of me. The idea that some kind of virus (or something) could come along and turn ordinary people into brain-eating, undead monsters is horrifying. However, unless and until the zombie apocalypse comes, brand-new babies will retain the title of scariest people ever. Yes, newborns are the most terrifying humans on the planet. Cute, lovable, but scarier than anything else you will possibly encounter during Halloween or any other time of year.

Being a parent to a brand new human is easily among the scariest things a person can experience. A teeny tiny person whom you love infinitely is completely dependent upon you. While you've more or less figured out how to keep yourself alive, when you hold a fragile little new baby it's hard not to wonder if you'll be up to the task of keeping someone so precious not only well-fed and rested, but safe from all of the dangers you're now extra acutely aware of. So, so scary.

Also? Newborn babies have incredibly sharp fingernails, which are terrifying unto themselves. Why every human baby gets a set of what feels like a combination of broken glass, foot-Legos, and eagle talons all rolled up into a single tiny package is beyond me. I managed an unmedicated labor and birth at home without much drama, but there were several moments in my first few days with my newborn son where —between his baby claws slashing at me and his shallow latch — I was just about ready to throw in the towel on the whole biological mom thing. I could swear I heard the music from Psycho every time he started making his little hangry gestures.

If you're going to survive life with the terrifying humans known as newborns, it helps to have a supportive, helpful partner, steady hands, and baby nail clippers. Yes, newborn's are the scariest humans in the world, but with the right tools and support, you will both survive long enough to see them grow into even cuter, but far less scary, regular babies. (Babies are the best.)