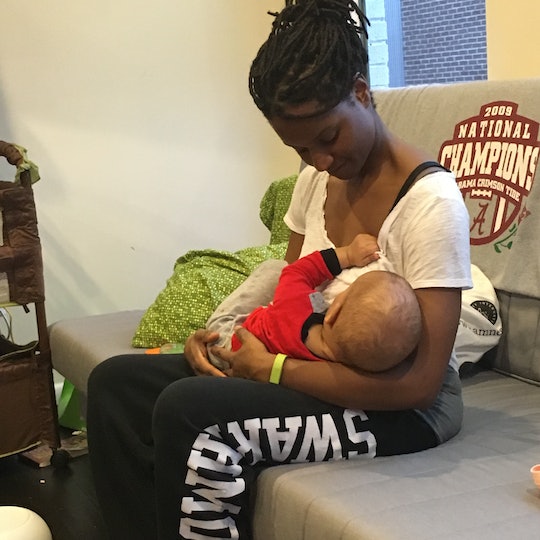 The One Reason We Need To Stop Calling Breastfeeding 'Natural'

The idea that breastfeeding is “natural” is almost as ubiquitous as the “breast is best” messaging public health advocates use to encourage new moms to nurse. I’ve certainly heard it plenty of times in the almost 19 months I’ve been nursing my son, and well before. I love breastfeeding, and while I am a huge advocate for moms to nurse if (and only if) they choose to, and while I've been guilty of this in the past, I also believe it may be time to stop calling breastfeeding ‘natural.’

The term ‘natural’ has been used so much, and applied to so many things, that it is all but meaningless at this point. Yes, it is absolutely beautiful and normal that mothers nurse our children. However, it's also "natural" for parents to seek out any and all other means to feed their children if they don't want to breastfeed, or if breastfeeding isn't an option. It's "natural" to give birth vaginally without medication, but it's also "natural" for people to use whatever means are available to dull their pain and discomfort and to get a baby out if vaginal birth isn't happening or no longer safe. Indeed, anything humans do can be construed as "natural" or "unnatural," if we take the time to make an argument for it. I mean, it's as "natural" for us to forage for or grow organic food as it is "natural" for us to use our highly intelligent and adaptive brains to experiment with hybridization and genetic modification in agriculture.

However, the biggest reason we should reconsider using the term "natural" as a default defense of breastfeeding is that it misleads families, and gives them false expectations of how their breastfeeding journey should or will unfold.

Though breastfeeding feels like second nature to me now, that was hardly the case when I gave birth to my son. I had a great birth experience, and both myself and my son were very healthy afterwards. However, I was tired like anyone would be after a day of labor and birth, and my son was constantly not just hungry but hangry (something he clearly inherited from me). He was also incredibly strong and mobile, refusing to be swaddled or even cradled for an extended period of time, armed with fearsome little baby talons that would scratch me whenever he attempted to latch. (If only breastfeeding pamphlets had moving pictures, like the newspapers in Harry Potter. Then we’d all know that, actually, nursing babies squirm all over the place and aren’t all peaceful and still like they seem in the brochures.) He would latch perfectly sometimes, including at his first pediatrician’s appointment, yet more often than not he’d be flailing and scratching, getting a horribly painful, shallow latch.

Fortunately for me, I have a supportive and encouraging partner who was available to bring me food and water around the clock, and take care of everything else so I could focus on recovering and nursing. He also bought cold packs and other comfort measures that gave me relief between feedings, so I could get through the early days when things were still painful and give myself and our son a chance to learn what we were doing. I also had amazing midwives who, as a matter of professional routine, check all the babies they catch for signs of tongue and lip ties and don’t leave until they see the new baby latch successfully (and until they witness other clues that let them know mom and baby are healthy enough to be left to rest). They focused a lot on how breastfeeding was going/troubleshooting breastfeeding issues during our one-day, three-day, two-week, and six-week follow up appointments, and gave me information about support groups and lactation consultants we could meet with ASAP if we needed additional support.

On day five, we went to see an International Board Certified Lactation Consultant (IBCLC) who taught me a few tricks to help my son get a deep latch every time, and within a couple of weeks we really got the hang of and enjoyed a pain-free nursing relationship. (I also got really good at clipping baby nails, because baby nails are the freakin' worst.) At my two-week follow-up visit, one of my midwives taught me how to nurse while laid back and laying down, which turned out to be so clutch. I could stop completely waking up for night feedings and, instead, just let my baby latch himself on and eat while we both slept through the night. We also learned how to nurse while babywearing, which made nap time a lot easier and helped me hike, shop, and do all sorts of other stuff while nursing my little guy.

It's true that breastfeeding is the means of nourishment that newborn babies are biologically primed to expect upon being born. There are multiple things, in addition to our hormones, that exist to help moms and babies get started on this journey. Our areolas darken and grow during pregnancy so they're more visible to babies, whose vision is poorer than it will be as they grow. Babies have a rooting instinct and an instinct to suckle. All of that is in place to help a healthy, full-term baby to nurse successfully. However, biological tricks alone aren't enough to automatically create a successful breastfeeding relationship, nor do they prevent babies from quickly learning to bottle feed, if that's what they're presented with early on.

Moreover, and more importantly, the fact that babies and moms have certain biological things that help us nurse does not mean that there is no learning involved with breastfeeding. Yet in our culture, the term “natural” implies that something is effortless and instinctive. “If breastfeeding is natural,” folks may reason, “then I don't need to prepare to do it. It will just happen.” But breastfeeding absolutely does require preparation, learning, and practice, especially in societies like ours where bottle feeding is the norm, and where many functions of women’s bodies, lactation included, are both stigmatized and poorly understood.

'If breastfeeding is natural,' folks may reason, 'then I don't need to prepare to do it. It will just happen.' But breastfeeding absolutely does require preparation, learning, and practice...

Many of us do not grow up seeing breastfeeding in action, particularly not in the earliest days when mothers and babies are both learning how to latch effectively, how to communicate with each other about nursing, and much more. By the time most mothers get to the point of nursing publicly, they've usually already mastered latching and overcome most of their initial problems, and they often nurse so while totally covered up, so none of the latching-on tricks, comfort measures, or anything else they had do to nurse successfully are visible. Worse, most health and sex education classes don't cover the basics of lactation when teaching about reproduction which, you know, is a glaring oversight.

Taken together, all of that means many new parents don't know basic facts about nursing that they’ll need in order to be successful, yet they still have an expectation that everything will go smoothly because the process is “natural.” That’s a setup for failure. When people believe that breastfeeding is “natural” yet don't understand how it works, many of the totally normal things that happen can be misconstrued as evidence that something is wrong, leading them to quit before they've gotten a chance to get started.

So many mothers, who expect that breastfeeding should just come “naturally,” are set up to fail when the reality doesn't match the image they're given, and when everyone around them, equally under-informed about breastfeeding and normal newborn behavior, suggests that their baby is “eating too often” or that they should just give the baby a bottle. They’re set up to think they did something wrong or that they're not cut out to breastfeed, when in fact everything they're experiencing is totally normal, and could likely be overcome with the right information and support.

Though breastfeeding feels like second nature to me now, that was hardly the case when I gave birth to my son.

When I think of much of the support that made it possible for me to breastfeed, a lot of it came down to what my partner and midwives were able to do for me. Unfortunately, almost none of that could be said to come “naturally” in a society that doesn’t always teach men to fully respect or nurture their partners, doesn’t provide universal paid parental leave for all parents, doesn’t ensure that all healthcare providers understand what it means to support mothers’ efforts to breastfeed, doesn't teach people what it looks like to establish a nursing relationship, and pushes mothers to put all sorts of other things (financial obligations, social pressures to entertain guests and/or “get their body back”) ahead of their postpartum recovery.

If we really want everyone who wants to breastfeed to be able to, then instead of relentlessly suggesting that it is natural, we should make sure people actually have the knowledge and support they need to breastfeed for as long as they're willing or able. We should make sure that new moms know their feeding journeys can take many different forms, and that as long as they and their children are healthy and well-fed, that all of those journeys are valid. We should make sure people understand that while breastfeeding may not be instantly effortless and instinctive, it’s entirely do-able for most people, it typically gets easier as you go along, and it has plenty of benefits for mothers and babies.