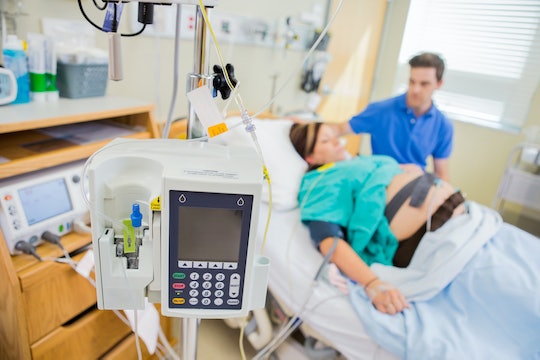 When I found out I was pregnant with twins, I had so many plans. I had plans for my pregnancy, and how sick I would be (or stay) and how I would handle my day-to-day life as my stomach grew and I prepared for such a life-altering change. I had plans for my labor and delivery, one sans medication that would allow me to call my birth "natural" and would assist me in experiencing birth the way many of my friends already had. I had plans to parent two boys that were half me, half my partner and completely worth it. Of course, none of those plans came to fruition. I was sick throughout my entire pregnancy and at every hour of seemingly every day. I lost my job because I had a high-risk pregnancy and was in the hospital frequently. One of my twin sons died at 19 weeks, and I was forced to birth a son that would cry and a son that wouldn't. I only took one baby home, and it was after I had a medicated birth which, according to many, isn't "natural."

I used to believe that a non-medicated birth is the only "natural" way to give birth. I used to think that having a "natural" birth was important. Then I experienced labor and the pushing and an unbelievable amount of pain associated with both and everything involved with bringing another human being into the world.

The term "natural" is thrown around to devalue women and their bodies and their unique experiences. For example, if a woman uses IVF to get pregnant, her pregnancy isn't "natural." She, then, is left defending her choice (one that is usually born out of necessity) to use modern medicine as a way to help her experience pregnancy, labor and delivery. She is left feeling that something is "wrong" with her. She is left combating a lingering notion that her pregnancy isn't as valuable as someone else's, because it wasn't done in a way that society has arbitrarily called "natural."

If a woman doesn't have curves, she's not a "real" woman because, as countless internet memes will tell you, "real women have curves." If a woman uses makeup she's not "natural" and, in turn, is lying about who she is or what she looks like. If a woman cannot or chooses not to have children, she isn't natural, because procreation has been arbitrarily labeled as "natural" and has evolved into just one of the many ways women are assigned value by a patriarchal culture. If a woman doesn't adhere to certain social standards of beauty or makes certain life decisions that deviate from what is conventionally asked and/or "required" of women, she isn't "natural." It's such a dangerous message to send to women; one that doesn't allow for women to make their own decisions or be unapologetically unique or carve their own way through life without having to constantly defend their choices and who they end up becoming, as individuals and as human beings.

That same mindset has infiltrated motherhood and the road women use to get there. Now, if you choose to use an epidural or have either an emergency or scheduled c-section, your birth isn't considered "natural" and, in turn, is devalued as an empowering experience. While the reason why unmedicated births are labeled "natural" stems from, I believe, a great place (an attempt to give power back to women when laboring, and avoid unnecessary medical interventions that essentially strip women of their choices and instill them with fear) it has become something hurtful and, at times, even vindictive. Instead of empowering women to make their own decisions about labor and delivery, we're shaming women into choosing something that may not necessarily feel comfortable. Instead of supporting women and believing that they are, in fact, completely capable of making their own decisions, we are laying out options for women and telling them that if they don't choose "wisely" or something very specific or do something in a very specific way, they're failing at being, well, women.

I have had other people, and other mothers, tell me that my birth wasn't "natural." I've been left defending my choice to (after 10 hours of drug-free labor in which I walked the hospital halls and tried to labor in a tub and rolled on a birthing ball and swayed back and forth, holding onto my partner) ask for an epidural. I had to essentially "convince" people that deciding to get an epidural was the best way I could bring my two babies into the world. I had to remind people of potential complications because one of my babies wasn't alive, and tell them that I was so exhausted and if I didn't get any sleep, I wouldn't have had the strength (physically, mentally and emotionally) to push my children into the world. I was, essentially, left trying to convince people that my birth mattered and I mattered and my choice, while different than the choices of others, mattered. I mean, that's exhausting. That's dehumanizing. That's not what women should be doing to other women.

I've had to fight the notion that there was something wrong with the way I gave birth. I've had to remind myself that I didn't do anything "wrong" and I didn't "give up" and I didn't fail. I had to tell myself that, just like my pregnancy and just like motherhood, nothing goes according to plan and, even if it did, my plan is no better or worse than anyone else's.

And now, as I try to get pregnant for a second time and start to plan for another pregnancy and labor and delivery and child (or children), I've had to close my eyes and tell myself the following:

Whatever you have decided is best for you, whether it was giving birth or never having children, you're a "real" woman and you're "natural" and you're defining womanhood for yourself and that definition is valid. Nothing that you choose to or inevitably do takes away from how natural you are. You are you. You are doing great. There's nothing about you that is "unnatural" or "wrong" or "less than."

I hope you tell yourself, and the women around you, the same thing, too.