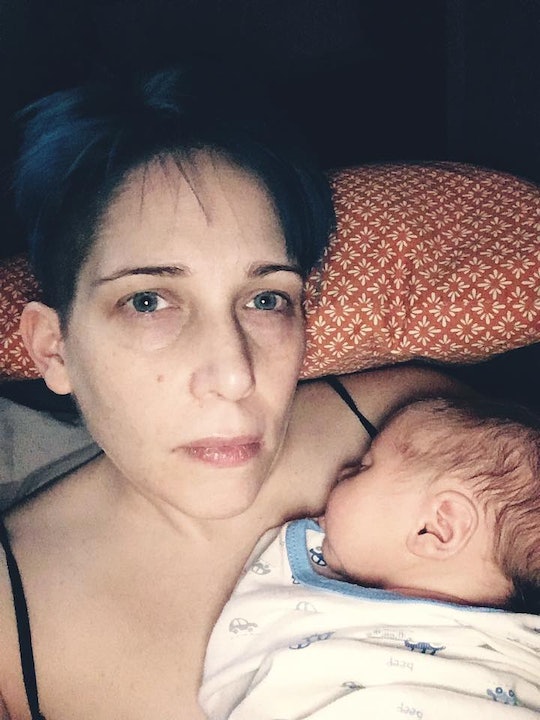 It seems like whenever someone mentions their baby waking up frequently at night, someone else suggests co-sleeping as an answer. The way co-sleeping moms described their sleeping arrangements made me imagine that co-sleeping involved a giant bed with white sheets and a peacefully snoring baby snuggled next to you. When I decided to co-sleep, I discovered that, in reality, co-sleeping is more like trying to sleep while a drunk octopus pees on you and pokes you in the eye. Seriously, people need to stop romanticizing co-sleeping. Like so many other parts of parenting, the reality isn't pretty and involves way more bodily fluids than you would have ever imagined.

When I was pregnant with my first child, I swore I would never bring her to bed with me. I mean, I had always planned on having her sleep in our room for the first couple of months, but she was never going to sleep in bed with us. Never. Then I brought her home from the hospital and all hell broke loose. She nursed the entire night, you guys, waking up whenever I set her down in her bassinet. It was horrible. She cried, I cried, my husband woke up, everyone panicked, and we all cried some more. So, I started co-sleeping with her. First in the co-sleeper, and then in bed next to me. By "next to me," of course, I mean on me, scratching me with her sharp baby-nails. Ironically, I co-slept because I was desperate for sleep, but there was no sleep to be had. She woke several times a night, ultimately deciding that morning began at 3:00 a.m. and literally could not fall asleep on her own.

Then my second child was born. Second verse, the same as the first, but worse, because my toddler and my newborn wanted to sleep in our bed. That's when I decided enough was enough. I had read the studies about safety and decided that our bed would be off limits. Which is good, because child one and child two still come to our room in the middle of the night. Co-sleeping, my friends, is the true The Neverending Story, and we need to stop romanticizing it.