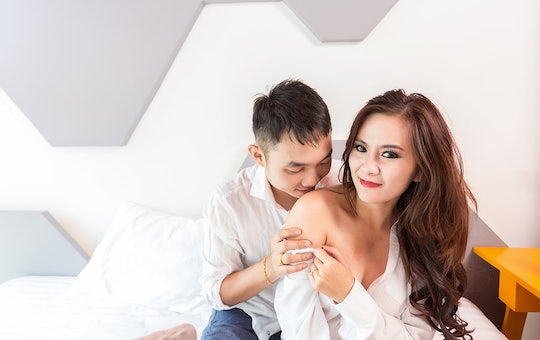 Why I Refuse To Call It "Maintenance" Sex

There's no doubt that sex is an important component in a lot of romantic relationships out there. But, as most people who have been in a relationship for longer than a few months can tell you, not every sexual encounter is going to involve tearing of garments, Olympic-level acrobatics, or even particularly intense cardio. As your life as a couple gets more intertwined, you may find your bodies becoming less intertwined. Enter "maintenance sex," i.e. the sex you have when one or both of you is only sort of feeling it. Only I refuse to call it maintenance sex.

As a concept, I'm all for having sex when you'd just as soon not from time to time, for a number of reasons. (In fact: full disclosure, I've actually described this type of sex as "maintenance sex" in the past. I've since reconsidered the term, if not the spirit. So I guess the more accurate title for this article could be "10 Reasons Why I Refuse To Call It Maintenance Sex Now That I've Given The Term Some More Thought.") For one, sometimes you don't know you're actually up for a really good screw until you get going. So-called "maintenance sex" can often turn into a surprise party you throw for yourself. Secondly, I feel like the Golden Rule — do unto others as you would have them do unto you — is definitely applicable to sex. You don't want them to "do unto you" when they actively don't want to, but if it's not a big deal for them, you'd appreciate it, right? It's just nice.

Not so nice? The term "maintenance sex" and the way it's been discussed as the term becomes more widely known. Fair warning: I fully cop to the fact that some of my reasons are nit picky. But, like I always say, if someone doesn't pick the nits you'll eventually get a head full of lice. So, with that to guide us, here are some of the reasons I will refer to my unexciting sex as anything but "maintenance."