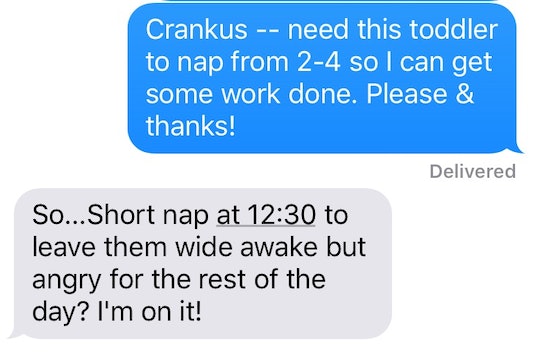 10 Texts Every Mom Wishes She Could Send The Parenting Gods, Who Now Run Her Life

It’s kind of common, especially for folks without kids, to think that parents are incredibly powerful people. According to popular belief, parents are supposed to be able to control their kids at all times, and are completely responsible for their current and future triumphs or (especially) problems. Your kid didn't get into a top college? Guess mom didn’t breastfeed. Your kid's a bank robber? Guess mom didn’t breastfeed. Sure, our choices matter, but make no mistake; the parenting gods are running the show.

For those who haven’t heard of the parenting gods, they’re the ones moms and dads mutter curses and prayers to as we go through our days, desperately attempting to get toddlers to brush their teeth, coax resistant children into their car seats, prying them off of our legs at daycare or during playgroup, and while attempting to put children to sleep. They’re a tricky bunch, but ultimately they’re on our side in this parenting adventure.

The problem is, with a few exceptions, their sense of humor is sadistic AF. So you won’t get much out of most of them without paying some kind of price first — a price that often involves enduring ear-splitting cries, the occasional bite or kick to the face, and doing way more laundry than you ever thought possible. I’m probably going to pay dearly for revealing secrets like this (RIP, bedtime), but here’s a glimpse of how conversations with the parenting gods typically unfold.