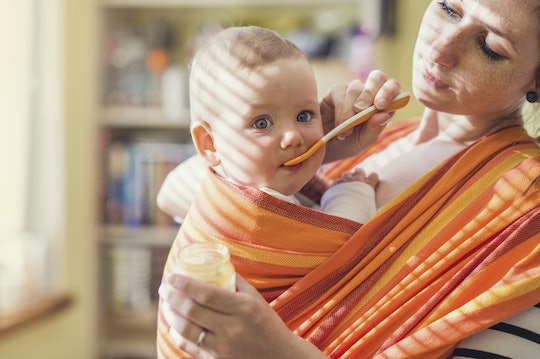 10 Things Moms Who Choose Attachment Parenting Are Tired Of Hearing

I'm an attachment parent (AP), which means lot of different things to different people, (some good, some bad). To me, it's a no-brainer and I'm proud of my decision to parent this way. Some people just don't get it, though, thanks to some significant misconceptions about attachment parenting. As a result, some people aren't shy about sharing their opinions. I know I'm not alone when I say there are things every mom who chooses attachment parenting are tired of hearing.

When I first became a mother, I had no idea what I was doing and I found some much-needed comfort in my AP research. It confirmed that the things I felt like I should be doing — picking up my baby when he cried, breastfeeding, sleeping close — were all natural things that so many parents do. I was comforted in knowing that my instincts were actually right and that I wasn't an aberration in the evolutionary chain who just didn't know how to mother.

Attachment parenting gave me the confidence in my abilities as a mother that I had been missing. However, as with anything, some people — either out of ignorance of AP principles or plain old disagreement — are vocal in their disapproval of my parenting. While judgment and shame might be part of the motherhood experience (unfortunately), there's no denying that there are things all AP moms are just tired of hearing, including the following:

More Like This
What Is RSV?
The Best Halloween Family Pajamas To Match Your Boos
Can Elderberry Help Prevent Illness In Kids? Doctors Weigh In
30 Adorable Baby Halloween Costumes, From Animals To Avocados