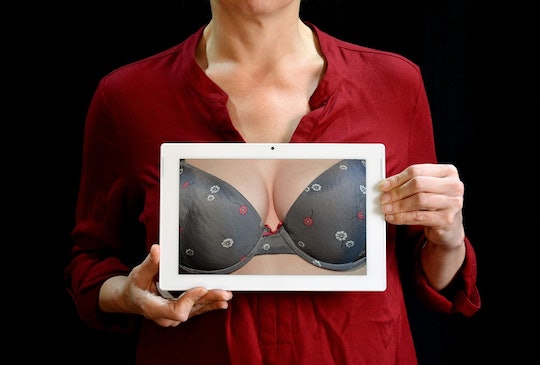 10 Things My Boobs Look Like After Breastfeeding, Because If I Don't Laugh I'll Cry

It is said loudly and defiantly, by many professionals in the field, that breastfeeding does not change your breasts. As a non-professional with pregnancy and breastfeeding experience, however, I call shenanigans. Sorry, but I just don't buy it. My breasts were different while I was breastfeeding, and they were sure as hell different afterwards. In fact there are lots of things my boobs look like after breastfeeding, and none of them are things my breasts looked like before breastfeeding. I find it's helpful to have a sense of humor about it, though, because if you fake a laugh loud enough you can hide your sobs.

OK, scaling back my dramatics a little bit, I'll explain. I nursed two ravenous, greedy babies (I called them my little boob goblins). My son was breastfed until he was a 17-month-old toddler and my daughter breastfed until she was 21 months. After I weaned my son, honestly (and miraculously) my breasts were exactly the same as they had been before I started nursing; same size, shape, and firmness. It was almost eerie, actually. Then came time to wean my daughter, at which point Reality must have roused its friend, Karma. Together, they launched an assault on my poor boobs, reducing them to a tiny pair of withered dugs. However (and thankfully) after about six months, Reality and Karma were like, "OK, we've more than made up for her getting away with keeping her boobs that first time around. Let's give her a little bit back," and my breasts sort of fluffed up a little bit. It's not like I was blessed with the rack of a 20-year-old again, or anything, but I got some fullness back and they were more like what I'd been used to if not exactly. (Apparently, this is common.)

Still, I stand by my unscientific assessment that breastfeeding can absolutely change your breasts, because it certainly changed mine. During the time when they were most altered, here's what they looked like (because if I can laugh about it, you can, too):