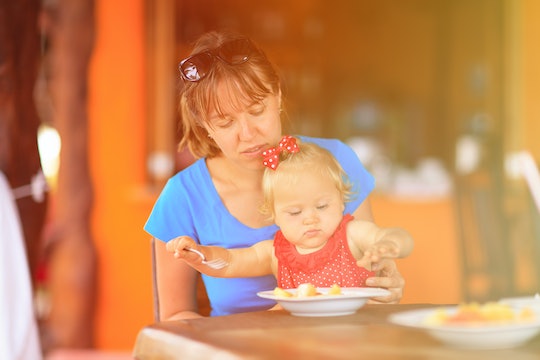 It's difficult for me to describe just how excited I was to go to a restaurant for the first time since having my son. I had been "trapped," for lack of a better word, in my house, eating quick, easy-to-make meals and lacked human interaction. I was finally getting the chance to be out in the real world with adults and delicious food and maybe even a much-needed beer. Of course, I completely overlooked the things my baby was thinking when I took him to a restaurant for the first time, and that oversight proved to be fairly detrimental. If I would have looked at the situation through the eyes of a newborn, I probably would have been better prepared for the dumpster fire I was walking into.

I had such high hopes for that initial outing, but taking a newborn anywhere — especially a place where you usually sit still, is usually crowded and is usually loud — isn't easy. I completely underestimated just how difficult it would be, and how exhausted the entire "outing" was going to make me. I mean, here I was looking at my seven pound baby, thinking that this would be a no-brainer. We would sit down in a booth (because duh) and I would feed him when he was hungry (which is easy, because his food comes out of my breasts) and for the most part he would just sleep, because that's all he really does anyway.

Nope. Nope, nope, nope. My baby had a massive blowout and was startled by a dropped plate and was crying and people were giving me weird looks when I breastfed and the baby bag was heavy and dear lord, why is it so hard to eat when you're simultaneously holding a newborn? It was, well, an intense situation, so I can only imagine what my baby was thinking throughout the entire process. I will never know for sure, but I think it's safe to assume he had the following thoughts, and frequently: