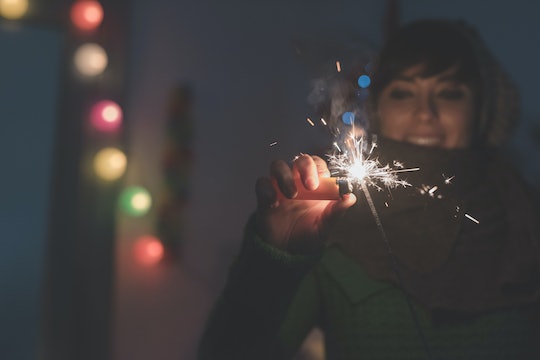 New Year's is always a difficult time. Why? From TV to your phone to subway ads, people are insisting you resolve to get skinny in the New Year. But bear in mind, ways to handle New Year's diet resolutions when you have an eating disorder are not only vital to your mental health; they can save your life.

When I was 10, I purchased a box of petit-fours from a mail order catalog. I'd convinced one of my parents that it was a Christmas gift for the other, but I had no intention of sharing these delights. I can still remember the night I tore open the box and devoured all the petit fours, hiding the remains in my closet until after New Year's. I then resolved to be better; to be less of a pig. Full of shame and self-disgust, I was a kid suffering from disordered eating, even though had no real sense of what my malady was; only the pain I felt. By the time I turned 11, I was at war with my body. The battle would reach a boiling point when my 14 -year-old self weighed 79 pounds. I'm older now, and even though I'm in recovery, what plagued me as a young child still plagues me, today.

Eating healthier and exercising are two very common New Year's resolutions, but based on your personality and or genetics, if taken to the extreme, these resolutions can turn into disordered eating, according to the Eating Recovery Center (ERC). Starting out with what seems like small changes in eating habits or exercise patterns may not seem like a warning sign that something is wrong, but when they become compulsive and start to interfere with your day-to-day life, they can be dangerous — even deadly. According to Janet Whitney, M.A., M.F.T. and the Eating Disorder Program Director at Sovereign Health in California, who has over 30 years of expertise treating eating disorders, tells Romper that an eating disorder is a mental illness. A fatal one. In fact, she says, it has the highest mortality rate of any mental illness. "Someone passes away every 62 minutes from an eating disorder."

When your resolve to "eat clean," becomes a compulsion, you might be at risk for developing disordered eating. According to the American Psychological Association, orthorexia results from an obsession with eating clean and has mental and physical consequences. Respectively, when it comes to working out, when your workout routine goes from wanting to work out to having to work out, noted the ERC, this could be signs of a problem.

In my recovery, I'm living one day at a time, which sounds like recovery-speak because it is. The following help me deal with all the New Year's diet resolution hoopla because, for me, it's just not an option.