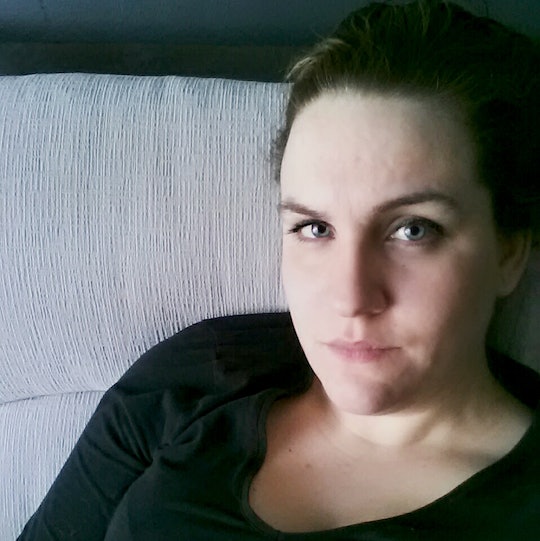 There aren't many things that I'm afraid to admit about my life. In fact, most of my work as a writer specifically involves sharing extremely personal stories, like my history with mental illness, or all of the mistakes I make on a daily basis as a parent. Being so open might not be for everyone, but since pretty much no one gets to exist without struggling with something in their life, I figure sharing my challenges with others is a way to both help me deal with them, as well as letting other people know that they aren't alone. As comfortable as I am putting the details of my life out in the open though, there is one thing I've never really even been able to talk about, let alone write about. I've always kept the fact that I binge eat compulsively a closely-guarded secret, and even though I know I should ask for help, the truth is that I’m afraid to admit I have an eating disorder.

I’m pretty sure that most people I know have no idea just how much I struggle with hating my own body. Even though I'm heavier than I should be, according to adult BMI calculators, I'm not obese (or even plus-sized), and in our totally fat-phobic society, that means I fall into the "somewhat socially-acceptable" category of "fat person" (as opposed to significantly-overweight people, who are basically pariahs who apparently deserve to be ostracized, according to some people). Since I don't experience overt discrimination from others about my size, I've downplayed my personal shame towards my body by pretending outwardly like I couldn't care less about weight or body image, and joking about my love for doughnuts and hatred of exercise. If you try and tell me that your jeans are too tight because you've been eating too many chips after the kids have gone to bed, don't expect me to disapprove. "Meh," I'll say, "life is short and parenting is hard. Eat the damn chips if you want to."

Maybe, from my response, you'll think I've risen above obsessing about my body. But really it's that I'm too embarrassed to empathize, too ashamed to let you know that, not only do I struggle with the exact same thing, but I also feel entirely powerless to try and stop it.

Binge eating disorder, according to HelpGuide.com, is, essentially, compulsive eating. Out of control eating. Eating when you know you should stop because it's not about hunger but instead about self-medicating, and using food to meet an emotional need. The first time I remember really, truly recognizing that my relationship with food was seriously messed up was when I was 19. I found myself about to lose my grandfather — a wonderful man I’d lived with most of my life and adored beyond words — to Stage IV lung cancer after an almost-five-year battle, and the heartbreak I felt on a daily basis was like no other.

One afternoon, I wandered into the kitchen — not for any specific reason, I wasn’t actually hungry — and before I knew it, I realized I was stuffing food into my mouth. Anything I could reach, I ate, desperately trying to make myself feel something that wasn’t overwhelming fear or anticipatory grief. It wasn’t enjoyable — it hurt, and I felt sick afterwards — but in some bizarre way, I also felt safe in that moment. Like somehow I'd just helped myself feel a little bit better.

Even though the part of me that knows better realizes my disorder is real, the part of me that feels ashamed still believes it’s my own damn fault. And thanks to our unabashed, fat-shaming culture, I'm well aware that I'm not the only one who would think that.

Food has always been the most effective way I’ve known how to deal with discomfort, the best way I’ve found to calm myself when my mind is overwhelmed and telling me that it’s my own fault for being disorganized, distracted, lazy, or whatever else is keeping me from getting anything done. (Only now, at age 30, do I realize that I actually have ADHD.) I’ve always done it — rewarded or comforted myself with food, celebrated with food, consoled myself with food. And despite the negative consequences, it’s always worked, really, really well.

My twins are 3 years old now, and although I did at one point lose the weight I’d gained during my pregnancy (the stress of being in the NICU with them for four months made that pretty easy), I’ve long-since gained most of it back, in large part because eating helps me offset the pressure of trying to be a good mom to two energetic, sassy little humans. The way some moms reward themselves with wine, I reward myself with food. But the irony is that, when it comes to binge eating disorder, that reward doesn’t actually feel rewarding.

A few nights ago, when my husband was out and my kids were asleep and the house was quiet, I spent the better part of an hour looking for the perfect, kids-are-in-bed, I’ve-had-a-long-day treat. I scoured Pinterest for something quick and easy, and decided on a quickie chocolate mug cake. It was delicious, of course, and took the edge off how I was feeling, but as soon as the initial swoon started to wear off, reality kicked in. I remembered that I wasn’t supposed to be doing this — how I’d told myself the numbers on the scale were getting too high, and that I’d vowed to reign it in. But instead of stopping me, that feeling — the shameful self-loathing — made me reach for something else. In this specific case, it meant polishing off the kids’ Goldfish crackers by the handful, not even because I wanted to, but because I felt so guilty I couldn't stop myself. And afterwards, I sat and stared at that chocolate-smeared mug and the empty cracker bag, and my stomach turned. You did it again. Why did you do it again?

Even though I know full well that my relationship with food is a problem, and even though I know full well that binge eating disorder is a real, honest-to-goodness, written-in-the-DSM-5 condition, I haven't been able to bring myself to discuss it with my doctor. Because even though the part of me that knows better realizes my disorder is real, the part of me that feels ashamed still believes it’s my own damn fault. And thanks to our unabashed, fat-shaming culture, I'm well aware that I'm not the only one who would think that.

What if I explain all of this to my doctor, and she gives me the popular-yet-not-at-all-helpful canned refrain about "eating right and exercising"? What if she tells me that the feeling that I can't control my binges is all in my head, that I just need to have a little more self-discipline? What if she says the very thing I'm most afraid of might actually be true, which is that the problem is me, and that I shouldn't be trying to place the blame anywhere else?

Because I've struggled so much already with mental illness, I've learned a thing or two about stigma. And just like the stigma surrounding depression keeps people from asking for help and making real, life-saving changes in their lives, the stigma surrounding obesity — the incredibly misguided belief that fat people just need to try harder to lose weight — only bolsters people's suffering. The reality is that the reasons behind someone being overweight are myriad, and that everyone's story is different. The only difference it seems, between someone struggling with their weight and someone struggling with, well, pretty much anything else, is that overweight people are literally carrying their pain around with them for the rest of the world to see. For the rest of the world to judge freely.

I have an appointment with my doctor coming up soon, and I've promised myself that I'm going to discuss my situation with her no matter what. And even if it goes terribly — if she tells me I just need to try harder, or that it's entirely my own fault my butt jiggles the way it does — it'll still be worth it. Because one thing I've learned from talking openly about things that I'm afraid to admit to is that the act of keeping them a secret is toxic in and of itself. Talking about my eating disorder might not magically make it go away — and who knows, perhaps it never will. But if there's one thing I know I can do by finally talking about it, it's release the shame I've taught myself to hold onto for all these years. And that alone can make a huge difference.