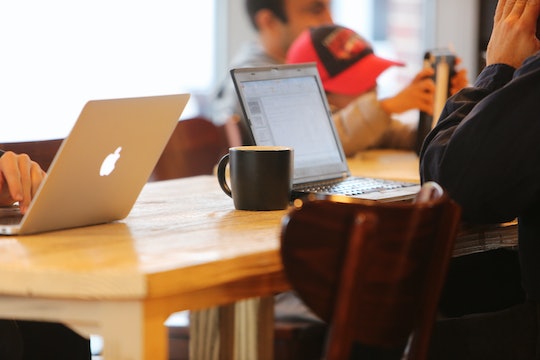 The United States likes to consider itself a society based on “family values,” but there’s not much evidence that's true in our public or workplace policies unless you define "family" like Michael Scott from The Office: a boss and their dutiful employees, all braving ridiculous and awkward situations together. Especially when we compare our workplaces to workplaces around the world, it’s painfully obvious that American companies hold parents of young children to impossible standards. Though most people don’t think to question a lot of our dominant work culture, many of the practices and labor policies we put up with essentially ignore the fact that workers (parents and non-parents alike) are human beings with lives outside of work. That can be somewhat manageable when you don’t have kids, but once you do — especially when those kids aren’t yet old enough for school — it can be very difficult to maintain that facade.

Most of society, for better and for worse, is in solid agreement that parenting should be every parent’s top priority, and that parenthood should be a rite of passage for most or all adults. Yet most employers simultaneously demand that their employees put work first, even after they become parents. That’s especially hard on parents of young children, because our society also doesn’t systematically provide for their care and learning prior to kindergarten. Parents are left to figure out on our own just what, exactly, we should do with these precious little people for as long as five whole years, while going to work every day in places that aren’t willing or able to accommodate them.

For multiple political, economic, and social reasons, American workplaces treat accommodating basic facts about human life — like that humans occasionally get sick, need breaks, and reproduce — like unexpected inconveniences, or luxuries that should only be available to workers with a certain level of education or specialized knowledge. Unfortunately, our bodies don’t understand that apparently, they shouldn’t be fertile (or susceptible to illness, or fatigue) unless an employer thinks our particular combination of degrees, skill, and on-the-job behavior makes us worthy of paid family leave, sick days, or vacation time.

Frankly, that’s nuts. Every person who sets foot in an office, or behind a fast food counter, or onto a construction site, or anywhere else, is a person. All people should be able to meet their basic human needs, which often include caring for tiny people we love, without risking our entire livelihoods. The following workplace oversights put parents of young children in an awful bind, as far as meeting high standards for employment and parenting are concerned. We’re long overdue to fix this mess, once and for all.