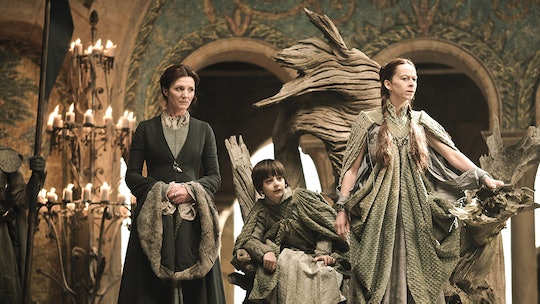 11 'Game Of Thrones' Parenting Moments We Can All (Eh, Kinda) Identify With

If you were anywhere in the greater New York metro area the other day, you perhaps heard a very loud, very long squeal. My bad, guys. That was me finding out that Game of Thrones is coming back on Sunday, April 24 on HBO. But my excitement aside, this show is not for everyone. GoT is not a show for the faint of heart. It's also not a show for someone easily scandalized by lots of naked lady-boobs.

Like the books it is based on, the show pulls absolutely not punches when it comes to depicting a cruel, brutal world, and that includes its treatment of children. Case in point, the first episode of the first season ends with a child getting thrown out a window. (Does it count as a spoiler if it happened in the first episode of season one five years ago? I just don't think so. Fair warning for the rest of this article, though: spoilers abound.) But despite the fact that this show can be downright traumatizing for a parent to watch, it's also a show in which many if not most of the main characters are, in fact, parents. So it stands to reason that there would be a lot of opportunities for moms and dads to connect what's going on in Westeros to what's going on in their own lives... hopefully with a lot less murder, rape, and incest.