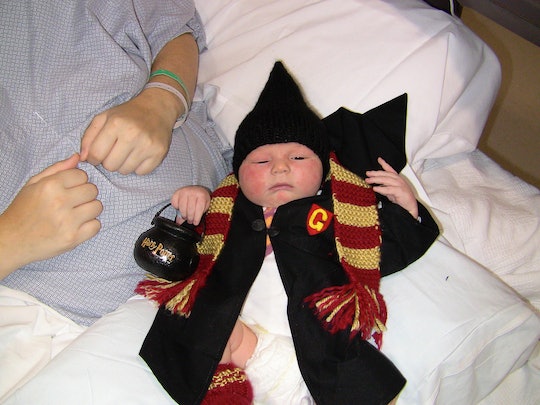 There's really no other way to say it: I can’t wait to introduce the Harry Potter series to my child. I wouldn't go so far as to say I'm obsessed with the series, but I am a fan. A big fan, actually, and one who's already started involving my son in HP fandom. It’s one of the few fictional sagas that I have emotional memories attached to, like how my mom sent me the first book in a care package when I was sick during my freshman year of college, or how she and I found ourselves at a small town release party for Book Seven years later, complete with a man dressed as Hagrid riding a motorcycle around town, and a reporter dressed as Rita Skeeter quizzing the crowd (it was even more epic than it sounds, you guys). Like a bajillion other people, I too stayed up until 3:00 a.m. reading, and managed to finish the entire thing in less than 24 hours. And yes, I totally teared up, by which I mean silently ugly cried as Harry made his final approach in the Forbidden Forest. Ah, I still get chills thinking about it.

Of course, sharing it all with my son goes beyond my own personal feelings, I swear. I also understand that other parents have their own ideas about how their kids will relate to the series, if it all. For me, it really comes down to what I hope he'll experience and gain from it, including but not limited to: