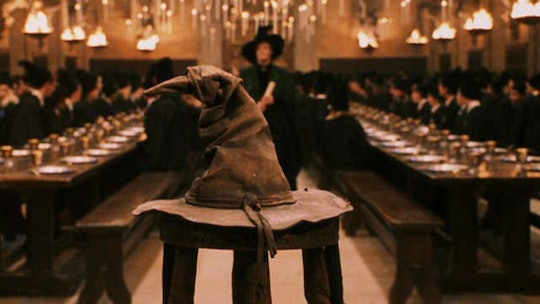 Dear Parents Of A Child Who Is Clearly A Ravenclaw,

What a time for our kids to be alive! They don't know how lucky they have it. Our world now has nearly ubiquitous Internet access and toddler socks with non-slip tread, and JK Rowling has already completed her beloved Harry Potter series so we are no longer with baited breath for the next book to come out like we were from 1997 to 2007 (or, for the movies, from 2001 to 2011, if that's your preferred way to consume the wizarding world). Most of us who are new parents were once kids who grew up with Harry Potter and his pals, or were semi-late adopters who jumped on the bandwagon as adults (*cough*). So, in fact, it's our kids who are the first generation to grow up with the entire saga at their finger tips. Which means, that we are the first generation to parent with the entire saga at our fingertips, too.

I know. This is a major revelation. I'll give you a minute to let that sink in.

Hopefully, you're having fun introducing Harry Potter into your kids' lives in an age-appropriate, non-obsessive way. My son is not even two years old yet so really, anytime I make a reference, it's for my own enjoyment and not his. That's the thing about parenting is that you understand more than your little ones do, at least while they're young. Am I overthinking this? Probably. But I can't help, it's in my nature as a Ravenclaw, just like it may be in your little's nature if they were sorted the same way. What else can I tell you about raising someone from the house of Blue and Bronze? A couple things, actually.

First, do you have a spare bookshelf or two? Because you'll want to stock it with books and books and books and...a few more books. What's that, you say? Can you just get them an e-reader and load it? NO YOU CANNOT GET THEM AN E-READER ARE YOU INSANE??? Ravenclaws are quirky, and we value our education, and we want to feel as smart as we are, which means turning pages and reading words on actual paper like all the witches and wizards who came before us. You don't feel like the most intelligent person in the room (Ravenclaws love feeling this way) by skimming an e-reader.

You may also want to have plenty of art supplies and maybe one of those really cool science kits that comes with actual stuff to mix, because you can be certain that your offspring wants one, and if you don't get it for them, they will still be feeling the sting of it in twenty or so years. (*sniff*) In addition to being book-smart, Ravenclaws are ridiculously creative, so smocks and lots of cleaning supplies are probably a good idea to have on hand. Your kid is going to go to town on any sort of messy project you give them, especially the ones involving food and/or finger paint.

Seeing as you're an awesome parent, we don't have to worry about you showing any kind of judgment when it comes to your kids' eccentricities. But, just in case you are ever having a bad day and find yourself questioning why it is they're keen on making a to-scale replica of the solar system out of yard waste, or decorating their room with noodles, I would encourage you to approach it in a loving, supportive, and gentle way. Ravenclaws believe in embracing quirks and differences, so any hint that you disapprove is going to be tough for them. That said, assuming you're able to withhold judgment (and you are going to be able to because, once again, you are an awesome parent) you will also want to get ready for hours upon hours of entertainment: Your young Ravenclaw is going to come up with some hilarious ideas and witty insights in the coming years.

All you need to do is sit back and enjoy the ride, and of course, love them unconditionally...and also keep them consistently intellectually stimulated, challenged, plied with fresh books, and also understand their complex senses of humor at all times. Easy, right?