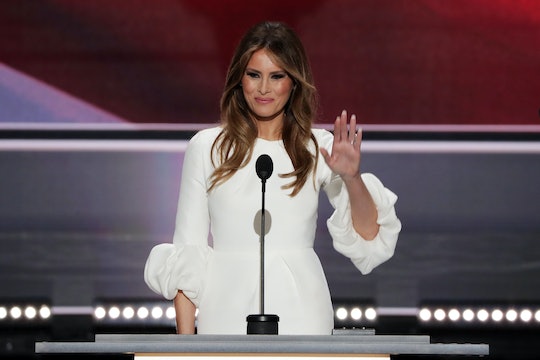 11 Surprising Facts About Melania Trump That You Probably Don't Know

Melania Trump fame is mainly rooted in her being "Donald's Trump's wife." However, the first lady, while supportive of her husband's wrongdoings and offensive beliefs, is still her own person with a complex history. The internet is brimming with plenty of surprising facts about Melania Trump, even though she has attempted not to draw too much attention to herself since her husband began his presidential campaign.

Melania has made plenty of headlines in the past few years, many of which have painted her as the subject of ridicule. When she plagiarized parts of a Michelle Obama speech at the Republican National Convention, she was endlessly meme'd. Many pointed out the irony in her anti-bulling advocacy, considering her husband's track record of bullying people on Twitter. And, of course, she has been endlessly made fun of for her fashion choices, from the pink dress she wore when talking about bullying to the stilettos she wore when visiting hurricane victims in Texas to the diamonds she "ate" for a Vanity Fair Mexico cover shoot. Everything Melania does is under scrutiny, and with so many critics, it's no surprise that she chooses to keep to herself most of the time.

Here are 11 facts you may not have known about First Lady Melania Trump.

She began her modeling career at age 16, according to Newsweek. Modeling took her across Europe, to cities including Paris and Milan.

2. She is one of only two foreign-born first ladies.

Melania Trump is from Slovenia, a small European country. She is only the second first lady to have been born outside of the United States, according to TIME. The first was London-born Louisa Adams, who was married to John Quincy Adams, the sixth U.S. president, according to TIME.

3. She went to college for one year.

She studied architecture and design at the University of Ljubljana in Slovenia for a year. As the New Yorker noted in 2016, her website previously stated that she received a degree from the university, when in actuality, she dropped out after one year. In fact, she took down the website shortly after questions about her college education came to light, according to Times of Israel.

Melania first came to the United States in 1996, Newsweek reported. She was about 26 years old at the time, and she moved to further her modeling career.

5. She made a very small cameo in Zoolander.

Her husband got to say a line and she didn't, but like, she was there.

6. She had a jewelry line for QVC.

A reference to the jewelry line was removed from the White House website on the day of Trump's presidential inauguration, according to CNN, because the White House worried it would seem like an endorsement (which it did).

7. She also developed a pricey line of skin caviar.

The line supposedly never made it to store shelves, according to Racked. However, that hasn't stopped Melania from slathering it all over Barron's body every night. According to the Huffington Post, the moisturizing products were slated to sell for anywhere from $50 to $150.

8. Donald was on a date with another woman when he first asked Melania out.

The couple first met in 1998, at a party at New York's Kit Kat Club. Donald asked Melania for her number, but she said no, because he was there on a date with another woman, according to the New Yorker. (The unlucky woman was Norwegian cosmetics heiress Celina Midelfart. Yes, Midelfart.) Unsurprisingly, Donald wouldn't take no for an answer; he continued to pursue Melania, and the rest is history.

Melania Trump is fluent in five languages, according to CBS News. She can reportedly speak Slovenian, English, French, Serbian, and German.

11. She doesn't always agree with her husband.

He's an adult. He knows the consequences and so I let him be who he is. I give him my opinions, many, many times ... I don't agree with everything that he says, but you know, that is normal ... I'm my own person, I tell him what I think, I'm standing very strong on the ground on my two feet and I'm my own person, and I think that's very important in the relationship.

That's a nice sentiment... unless the hidden meaning of this is that either Donald won't listen to her opinions or that he's made her too scared to share them.

Perhaps she has more in common with her stepdaughter Ivanka Trump than people think!