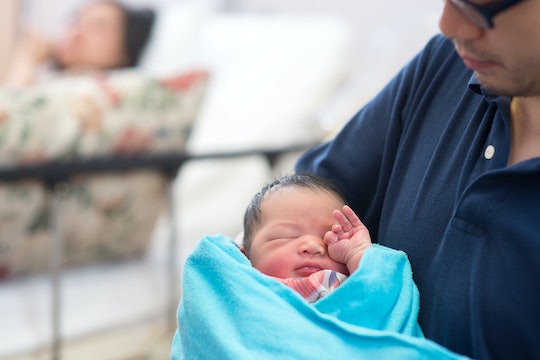 My partner and I never had to question whether or not we wanted kids because, well, we both wanted them. Our folks made it look pretty easy to raise decent human beings, so we didn’t put too much thought into how becoming parents might affect us, either. It was surprising what a huge impact a tiny newborn person can have on a household, though. I wish we had talked to more people about it, actually, as I'm pretty positive the things couples need to hear when they become parents would have made all difference if, you know, we had actually heard them. In the early days of adjustment, when everything about my life, including my relationship, suddenly seemed different — and not always in a great way — I know I could have used some reassurance that all the weird, scary, anxious feelings we were having were totally normal.

More Like This
Here's The Deal With Babies Who Sleep With Their Eyes Half Open
30 Vintage Photos Of Parents Giving Their Babies A Bottle
Therapist Says: Alone Time For Moms Is A Necessity, Not An Indulgence
Postpartum Sex Pain: Why It Hurts & What You Can Do

When I’d scan parenting forums and new mom message boards during late night nursing sessions, I didn’t come across many parents who were sharing how their partnerships were affected after having a baby. Lots of moms were weighing in on the same jumbled mess of emotions I was experiencing in the wake of birthing a person, but in my attempt to measure up against other new parents, as couples, I was coming up short. Were we doing OK as a team? Were we going to make it as a couple when all we seemed to do was hover around an infant who gave us absolutely no constructive feedback?

I wish there was more discussion about what to expect, as co-parents, when you welcome a baby. We could have really benefited from hearing these things, especially as a couple, after we became parents: