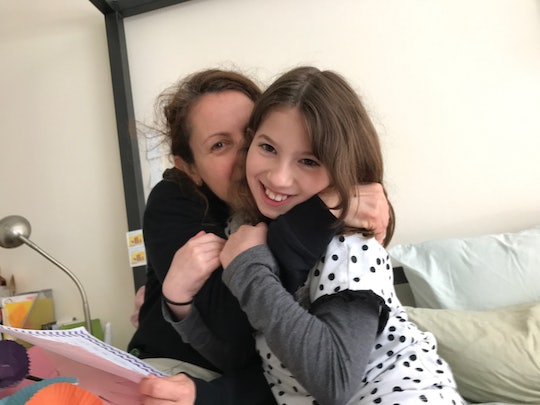 Why I Plan To Tell My Daughter About My Eating Disorder

When my daughter was around 4 years old, she was frustrated with her hula hooping skills. “I need to be fatter, mom, to make this fit better so I can do it.” Her innocence would charm most, but this statement horrified me. As someone with body dysmorphia, who struggled with disordered eating for most of my life, my daughter’s wish to be bigger was in stark contrast to my lifelong secret wish to just be two, five, 10, and 20 pounds less.

I was 8 years old the first time I went on a diet. Our teacher had weighed us, one by one, at the front of the classroom in front of all our peers. Though the numbers weren’t called out, everyone wanted to compare notes. At 80 pounds, I was one of the heaviest girls among my friends. After that experience, I couldn’t stop thinking about how much I hated my body. Unfortunately, that hate galvanized a cycle of shame and overeating and compensating for the overeating by overexercising, and that cycle lasted for decades.

When my daughter was born, the one thing I wished for her was that she’d never struggle with food or body image. So far, the only problem she’s had is a misguided perception of how a hula hoop should “fit.” But she’s a girl, who’ll develop into a woman, and American culture is still hellbent on perpetuating a universal standard of female beauty and shape. It’s come a long way since I was a kid, sure. Barbies were only made with one body type back in the day, and now there's a variety. There was never a fat character on TV that wasn’t played for laughs or to represent some grotesqueness. Now we have Kate in This is Us, and Rebecca, with her heavy boobs on Crazy Ex-Girlfriend, and I see more of myself represented in the media than I ever did growing up. My daughter has more examples of "real women" now, but society still has a long way to go. As long as magazines are touting ways to “Get Your Body Back After Baby,” we have a lot of work to do when it comes to abolishing beauty standards.

So I expect, at some point, I’ll share what I know about having an eating disorder with my daughter. I have lived with it for so long and it’s had a poignant effect on me, most notably because of the work I’ve done to quash its power over me. I am a better person for having done this work, and I need to show my daughter that it’s always possible to do the hard things. These are some of the reasons why: