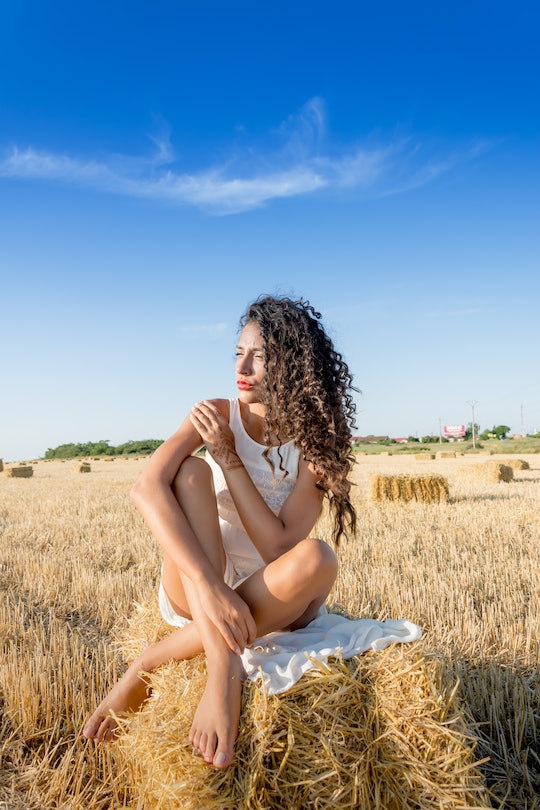 On the surface, it's a familiar story: woman gets pregnant, woman has baby, woman struggles for months before finally getting her body back. But Ilana Delgado's "how I got my body back" secret wasn't a matter of toning up in post-natal yoga twice a week or doing a juice cleanse. It was a long nightmare that began when her body literally went missing after the birth of her first child. "I'm not being metaphorical here," she said in an interview with Postpartum Prospects Magazine, "Like, my body just went away. Poof. And before you even ask, I wasn't kidnapped or killed or anything like that. My body just vanished. No one could see me. I couldn't do anything. I was, for lack of a better description, a sentient energy cloud just sort of wafting around space and time."

Delgado's friends and family cannot explain or articulate the details or logistics of the disappearance, but describe it as "the weirdest f*cking thing they've ever seen."

Delgado noticed her body went missing approximately two days after she delivered her child via c-section. "At first I thought the nurses were just being rude and ignoring me," she said. "But then I realized my partner wasn't really making eye contact, either. Eventually I realized it was because I didn't have eyes or a face. Fortunately, I was able to communicate telepathically, so that was good, at least. But the whole losing-my-body thing was incredibly distressing. Plus," she added, "It completely put the kibosh on my plans to breastfeed, which sucked." When asked why she thinks her body went missing, Delgado doesn't have any clear answers. "It didn't leave a note or anything," she said. "My best guess is that it saw all those ridiculous magazine covers with celebrities in bikinis five minutes after giving birth with headlines like 'How I Got My Body Back Post-Baby,' and it took that as a sign that it was supposed to take some time off or something."

Delgado said that her doctors were less than helpful. "They kept kind of rolling their eyes and saying I could get clearance to exercise at six weeks postpartum. So I get the impression that they really didn't notice that my corporeal form wasn't there. They didn't seem to understand that at that point I really didn't care what my body looked like: I just wanted a body."

When medical science couldn't help, Delgado and her loved ones decided to use good old-fashioned detective work to get to the bottom of this mystery. "I put up missing signs at my neighborhood bodega and at the co-op," she said, before admitting, "Well, my friends did it for me. I couldn't because, you know, no arms." Delgado said that the hardest part was getting the wording right on the posters:

It wasn't really a missing-persons case. And if you say there's a body missing, people automatically think you're talking about a dead body, which I'm pretty sure it wasn't. Eventually I was just like, 'Screw it, if someone sees my body we'll worry about the exact details when we get the phone call.'

Months passed with no sign of Delgado's mortal coil. The missing signs, numerous pleas on social media, private investigator, abd interest from local media outlets failed to yield any kind of results. "It was tough, especially as a new mother," she said. "Fortunately, babies don't really care what our bodies look like, so my son and I were still able to bond and build a really wonderful connection in that time. But there are just ways that having a body helps you out. Like being able to hold your kid."

Finally, a few weeks shy of her child's birthday, Ilana Delgado and her family finally received the break in the case they'd been hoping for:

My body checked in to a movie theater in Union Square on Twitter. Apparently it went to see a Jack Reacher movie. I don't like that franchise, personally, but I was so excited to know where it was I didn't ask questions or judge. I just booked it downtown to make sure I got there before the movie got out.

Delgado and her flesh suit were reunited immediately with little fanfare but great excitement. "I just hugged myself. It was so nice to be back."

As for why her body left or what it did over the course of 12 months, those questions are still largely unanswered. "I can only guess," she said. "There are some clues. For example, I now have a lower back tattoo of actor Mandy Patinkin's face. So there's that. Also I keep getting texts from someone listed as 'BFF' about how we need to make plans to get together around Homeland's filming schedule. So I think it's safe to say that my body spent a lot of time hanging out with Patinkin. He seems nice, by the way. Really sweet. I don't love having his face tattooed on me, though."

But, ultimately, the reunion has been a happy one.

"I've changed in the past few months," Delgado said, "Having a kid will do that. I mean, a year changes everyone and humans are constantly evolving. My body has changed, too. It's a year older, it has some stretch marks from the pregnancy, and it's about 15 pounds heavier. Some of that, I'm sure, is residual postpartum weight, and some of that is probably due to lavish dinner parties it had with Patinkin. But either way, it's not a big deal. This body gets me to where I need to go and it did go through a lot with the pregnancy and delivery, so the 12-month absence is easily forgiven because it really did a lot of work leading up to that. But we're good. We're getting used to each other again and having fun doing it."

Note: Ilana Delgado is not a real person, Postpartum Prospects Magazine is not a real publication and physically losing track of your body is not a real thing. Please, don't buy into the idea that you have to hide the evidence that proves you experienced pregnancy, labor, and delivery. Your body did (and is still doing) an incredible thing, so be kind to it. You don't have to "get your body back." It was never lost.