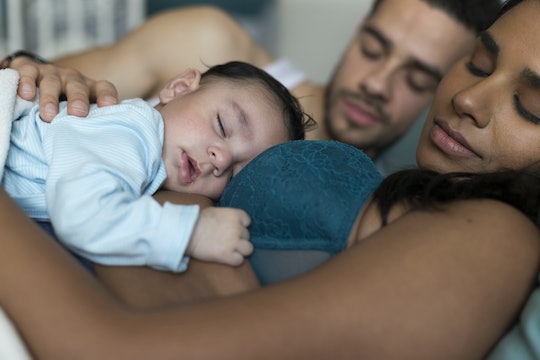 I knew, early on, how co-sleeping would affect my son. In fact, I was explicitly told by doctors and nurses that co-sleeping would help my son regulate his body temperature; something his body was failing to do a few hours after he was born. I watched as my body sustained his, even after he was no longer in the womb, in complete awe of how beneficial co-sleeping can be. I didn't realize, however, just how co-sleeping can affect your romantic relationship; not until a few months later when my partner and I had found ourselves constantly co-sleeping, reaping both the rewards and the pitfalls.

I was honestly a little worried that co-sleeping would kill the romance and passion between myself and my partner. We were already trying to adjust to parenthood, exhausted and sort of worried and kind of clueless, so the idea that part of that adjustment would mean sharing a bed with a tiny human, worried me. Were we strong enough to remain connected without constant sexual contact? Was sex that important in our relationship, that co-sleeping would essentially end it? I'm sure hormones and exhaustion played a part in the constant curation of my aforementioned thoughts, but I also think they're valid concerns that, even if I was at my most rested and my hormones at their most stable, I'd have been worried about.

It turns out, while co-sleeping did affect my romantic relationship, those affects weren't all bad. In fact, the majority of them were awesome. Sure, we weren't having sex as often and, yes, sometimes we got frustrated with one another because someone was getting essentially kicked out of bed, but we learned how to make co-sleeping work for us, and didn't mind it impacting our relationship in the following ways: