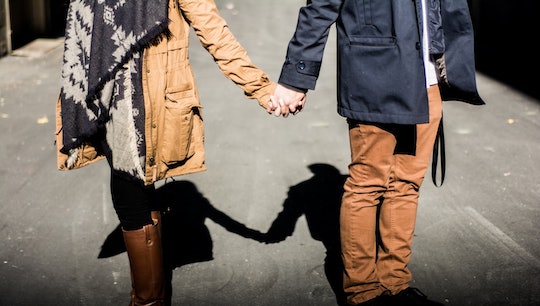 While many couples start out hot and heavy at the beginning of their relationship, there may come a time when it all comes to a crashing halt. In fact, it's almost inevitable that your sex life will go through lulls (yes, multiple, if you're together long enough) but that knowledge doesn't make it any less jarring when you realize it's happening. And beyond that, it's totally normal to not really know how to fix a dry spell in a relationship. Suddenly the long weekends of having marathon sex like bunnies turn into long weekends of Netflix and actually just chill. Or you both just get so busy dealing with the hustle and bustle of life — making deadlines, working overtime, and adulting like mad — that you start losing all that time you normally set aside for each other. And if you have kids, it often also means that your futile attempts at sexy time just get immediately blocked by your adorable but rather frustrating new form of birth control: the screaming baby.

Then there are other reasons you might not be having sex for a time. Hormonal changes, including those caused by birth control, might make you feel less than frisky. Or depression may hit you or your partner and cause libidos to all but vanish. In my case, I went through an awfully long, doctor mandated “no sex” phase during my second pregnancy. My OB/GYN called it “pelvic rest” but I called it simply “hell.” Before then, I was quite an avid fan of all things under the sheets. But afterward, I was forced to pretend I didn’t care. For six excruciatingly long months, which got extended further thanks to a pretty traumatic childbirth experience, I dealt with my new sexless reality. I often wondered how the hell my husband got by, but we did do lots of other things to try and keep the romance alive. Nowadays, we’re back in swing of things, but that didn't happen without a bit of work (I mean, we still have a toddler in our midst who would prefer all attention were on him).

For any of you currently going through a sex drought, fear not. Whatever the reason, there is plenty to do in the meantime to keep your relationship solid until you’re finally able to do the deed once (twice, three times) more. Here are some things the strongest couples know to do even (especially) when they're going through a sex-free phase.

More Like This
71 Instagram Captions About Love, Because It's All You Need
75 “Would You Rather” Questions For Couples, Ranging From Sweet To Sexy
What To Say If Your Partner Thinks You’re Cheating
10 Signs You Are Sexually Compatible With Your Partner
What Parents Are Talking About — Delivered Straight To Your Inbox