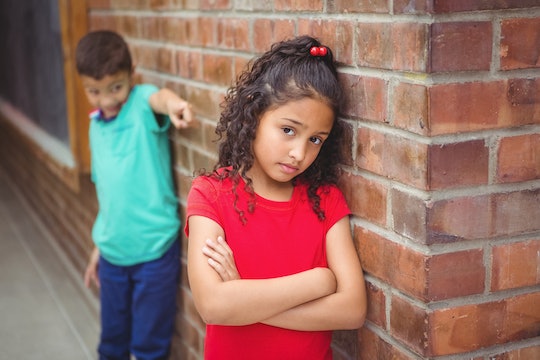 11 Ways School Teaches Your Daughter To Hate Her Body

Now that my daughter is in kindergarten, we've finally started down the path I've been dreading for years now: the inevitable comparisons she will now be experiencing with other kids. There really is no easy way to deal with kids and body image. No matter how much you build up your child when they're younger, or avoid using words like "beautiful" and "ugly" altogether, everything changes in school. Which is why, even though school can teach your daughter some fantastic things, school can also teach your daughter to hate her body.

Young children are blissfully unaware of what they look like in comparison with other kids, but that bliss will inevitably come to an end. I've seen my daughter go from being wonderfully unapologetic about who she is and how she looks, to suddenly being concerned with how others will view her. That change happened in one year. One. It breaks my heart, and I'm trying so hard to combat it with body-positive talk.

This morning, for example, was one of those instances. It's raining here, and my daughter was getting her rain pants and rain jacket on. She's four and a half years old, and while she's always been small for her age, she's recently been going through a growth spurt; fitting into clothes that are actually made with her specific age range in mind. I used to buy clothes that just fit her, because I knew that she would continue to fit into them for a long time (she wore a 9-12 month sized skirt up until she turned four!), but I've been buying a size up for the past few months, so that she can wear clothes for more than a single season.

Well, her rain gear is most definitely too big. In fact, she's kind of swimming in it, but she seemed excited when she first got it all so I let it be. Plenty of kids wear a size too big so they can grow into their clothes, but I guess the majority of those kids are boys. And guess what? After close to 20 minutes of my daughter essentially refusing to leave the house for a million reasons, I discovered that it was because she was afraid her friends would laugh at her.

My heart broke into a million pieces as I realized pieces of her natural body positivity were being chipped away. We sat down and had a talk about how what you look like should never matter to your friends; that what's on the inside is what ultimately counts the most. I told her that she is smart, and brave, and kind, and funny, and thoughtful, and loving, and also that she is beautiful, and nothing she wears is going to change that. I can only hope it sinks in, and I can only hope that her school won't teach her to hate her body. In the meantime, I'll look out for these 11 warning signs that my daughter is being taught the absolute wrong thing.