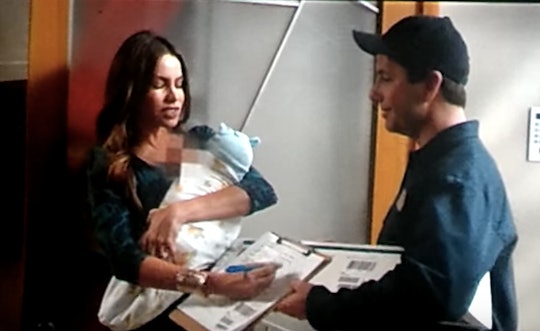 Everything about having kids seems like fodder for debate these days. In a way, it’s great that we’re having more conversations about motherhood in an age where we can “have it all” (except for the equal pay part). But, on the other hand, I get so frustrated that debating all things mom is just proving that mothers are relentlessly being judged for their choices. How a mother chooses to feed her kid, for instance, is endlessly dissected and judged and discussed, ad nauseam and with no end in sight. The media gets very little right about breastfeeding, in my opinion, and that seems to only add to the endless debate on what's "right" and what's "wrong."

Other than documentaries, the sight of a breastfeeding mom on a screen is solely a set-up for broad, slapstick humor or to somehow shame the mother choosing to breastfeed. The woman is either chastised for being so bold as to breastfeed in front of other people (like Sofia in Modern Family) or the woman's choice to breastfeed is being used as a severe character flaw (like Lysa Tully in Game of Thrones) or it's just some really funny, hilarious thing because boobs. I love physical comedy (I mean, you’ve got to have a sense of humor if you’re raising kids) and I'm all for complicated and complex characters, but do we need to cue the laugh track or denounce breastfeeding every time it is depicted on screen, both big or small? Like it or not, our views and opinions and even beliefs are shaped by the media we consume, and I just can't help but think that if we had a better representation of breastfeeding, the decision to breastfeed (or not to breastfeed, for that matter) would be used as a reason to judge and shame mothers.

I never really noticed how horribly television depicted breastfeeding, until I had a kid and was able to breastfeed myself. Now, the things I didn't used to notice are the things I wish the media would get right.

More Like This
Ginger Zee Had A Perfect Response After A Troll Asked Her "Who's Raising Your Kids?"
It's A Beautiful Day In Jenny Slate’s Neighborhood
35 Relatable Quotes That Prove Being A Mom Isn’t Easy
Breastfeeding Twins: Everything You Need To Know