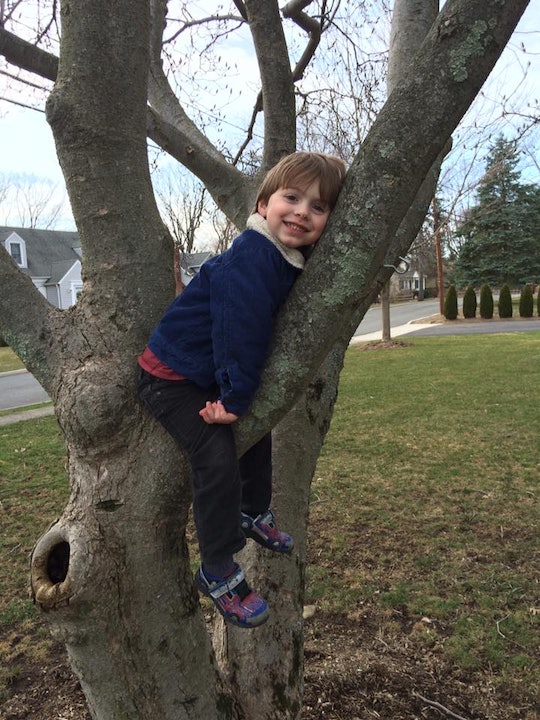 13 Things All Parents Of Adventurous Kids Are Tired Of Hearing

There are two playgrounds near my house. My kids tend to prefer "the big playground," named for its very tall, very large jungle gym. It has no fewer than three climbing walls, two firehouse poles, and at least three spring-loaded platforms my children enjoy launching themselves off of on the regular. The "big playground," plainly put, is freakin' awesome, according to my kids. At 4 and 2, my children are usually among the youngest on the larger equipment, which understandably makes some of the other parents nervous. While their concern is understandable, it has led to things this parent of adventurous children hates hearing.

There's much discussion and debate in the parenting world about how much freedom, supervision, and attention should be given to children, which often boils down to the idea of "helicopter parents vs. free range parents." If we're being honest, I think this is generally just a thinly-veiled way of giving one another permission to scrutinize and judge women under the guise of "thinking about what's best for the children." Look, every parent wants to raise happy, healthy, safe children. As their loving guardians, parents constantly weigh the risks and rewards of how much we should allow our children to spread their wings. Some parents are more cautious in the things they allow their children to do: that's fine! Some parents are less cautious than the more cautious parents: that's fine, too! It's almost like there are innumerable ways to parent happy, healthy, safe children!

Based on my experiences at the playground (most of them completely lovely), I find myself falling into the "less cautious" camp, at least when compared to the parents around me. The words of child welfare advocate and overall badass Lady Allen of Hurtwood resonate with me: "Better a broken bone than a broken spirit." So, my children tend to look like they're training for careers as stunt doubles when we're out and about. I don't know if their daredevil attitudes are due to my permissiveness or some inborn, adrenaline junkie tendencies harbored deep inside of them, but here we are: they're daring thrill-seekers and I encourage that. Do I worry about them? Duh: I'm a mom and, as such, I keep a vigilant eye on them and am ready to spring into action when needed. But, on the whole, I try to keep a distance and give them opportunities to figure out their own limits before intervening. This is my personal style. It's not everyone else's and that's absolutely fine, but it works for me and my family. In other words, I've got this.

So please, on behalf of other mothers who are liberal with their adventurous littles, I would be much obliged to never have to hear any of the following, ever again: