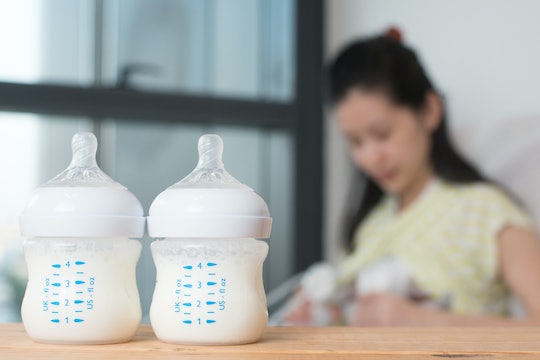 Thanks to the Affordable Care Act, health insurance plans must cover the cost of a breast pump. It might be rented or to keep, but you're entitled to one. I was lucky to get a brand new electric double pump, which I received a few days before my due date. I was grateful, but unpacking that thing was intimidating as hell. When you're a sleep-deprived new mom, the last thing you want to do is read an instruction manual. I think you'll find there are quite a few things that are easier than setting up a breast pump, and perhaps it's worth knowing now before you're knee-deep in tubes and bottles and an unimaginable amount of self-doubt. No? Just me?

I managed to sterilize all my pump parts before the baby arrived, but I didn't attempt to assemble it until I was postpartum. That, my friends, was a mistake. I was already emotionally fragile, and trying to put this Rube Goldberg booby contraption together was all too much for me. Once I did figure it out, I set it too high and cried when the damn thing tried to remove my tender breasts from my chest area. When a pregnant friend was due a year later, I went over to her house to show her how her pump worked so she wouldn't have to go through the same thing.

Setting up a breast pump isn't impossible. I'm placing it somewhere between finger painting and securing tickets to Hamilton. You will get it, and once you do, you can celebrate the fact that the following are now also in your wheelhouse: