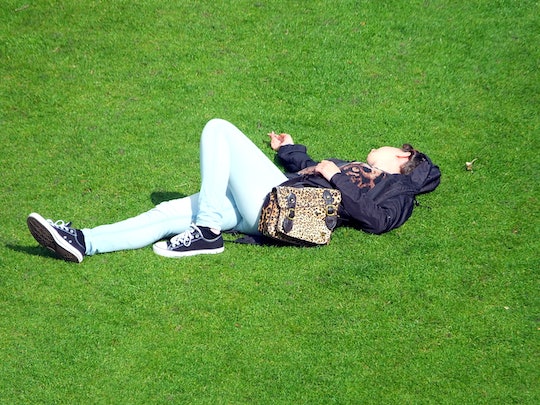 I found that the craziest thing about the weeks spent with a newborn baby is not the much-bemoaned exhaustion itself, but the long mental game we have to play during the days when we're not getting sleep. I mean, I thought I knew what it's like to get no sleep before having a baby, but sadly (or happily? Depends on how you look at it) I was ill-informed. Previously, if I stayed up most of the night for a ~super important~ reason (like studying for finals, enjoying the last night of summer camp, going to a fraternity dance, watching a Sex And The City marathon, mainlining a YA novel, etc.), there was at least a light at the end of the tunnel in the form of a nap, or the chance to go to bed early the next day. But when there’s a baby? There’s no light. There's not even a tunnel. There’s, like, a hint that maybe someday, years from now, you’ll get sleep again. But it’s more of a dull glimmer, or like a depressing neon flicker on an old sign that’s buzzing and half burnt-out already.

If nothing else (watch me grasp at a silver lining here, guys; It's gonna be so endearingly sad), at least the sleep deprivation is a rite of passage for new parents. You made it! You’ve crossed one of many parenting thresholds! Congratulations! Now, let’s laugh at some of the crazy ish that came out of mouths when we were in the thick of it.