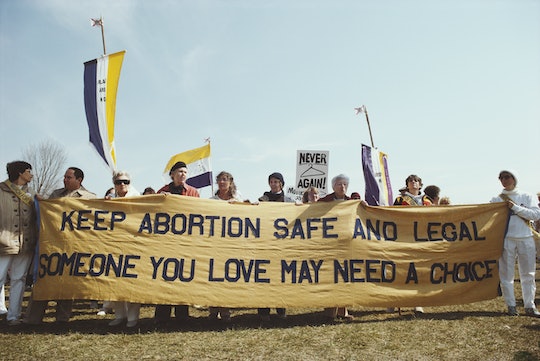 14 Things You Don't Have To Do When Having An Abortion, Even Though Everyone Says You Do

I'll never forget the day I found out I was pregnant for the very first time. Everything about that day was relatively normal, except for the fact that I felt anything but normal. I knew something was different and, when that pregnancy test confirmed my worst fear, I knew what I had to do. I was 23, in an unhealthy relationship, straight out of college, with only $50 to my name. I knew an abortion was the right choice for me, but I didn't know there were things you don't have to do when having an abortion; things everyone else says you should do; things anti-choice advocates and our patriarchal culture try to convince women they must do if they are to be "good" or "decent" or "worthwhile" women.

Sadly, it took me far too long to realize that my choice to have an abortion was just that: my choice. It wasn't something to be discussed or debated. It wasn't something to be criticized or judged. It wasn't something to be pointed to and used as a justification for why I deserved to be treated as less than, or scrutinized, or name-called, or harassed. While reproductive freedom continues to be a political talking point in this country, an estimated 28 percent of American women have had an abortion, according to the Guttmacher Institute. In other words, and according to the same institute, a reported 30,260,000 different women had one or more abortions from 1967 to the present. Abortion is normal. Abortion is legal. Abortion is a medical procedure so many women choose for themselves, their futures, their partners, and their families. Of course, abortion is understandably not the only choice for every woman and plenty of women choose not to have abortions. However, it's just that: a choice and, as women, we should have the freedom to do with our bodies what we believe is best for us.

Getting an abortion, even today, in the year 2016, is considered "taboo" and, as such, the conversation surrounding abortion is prescriptive. The longer abortion is debated in this county, and the longer women's feelings about abortions are policed by anti-choice advocates, the more women like me — women who've had abortions — suffer. I'm thankful for the day I walked into a Planned Parenthood and received safe and affordable abortion care. I'm thankful my abortion gave me the opportunity to eventually — and on my own terms — become the mother my now 2-year-old son deserves. I'm thankful for the people who saw my choice as nothing more than a necessary decision, and who helped me realize that I didn't have to do the following things:

More Like This
Here’s How To Fight For Abortion Rights
Can You Help Your Baby’s Hair Grow?
Spain Could Offer Up To 5 Days Of Menstrual Leave A Month & It'd Be A Game Changer
These 4 Sleeping Positions Will Keep You Comfortable After A C-Section