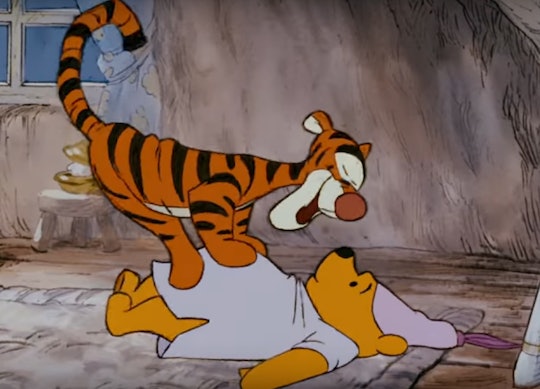 In celebration of Winnie the Pooh author A.A. Milne’s birthday, Jan. 18 is officially National Winnie the Pooh Day. And what better way to celebrate Winnie, Eeyore, Tigger, Rabbit, Piglet, Owl, Kanga, Roo, and Christopher Robin than to check out some Winnie the Pooh quotes about love? Especially since Valentine’s Day is coming up.

In fact, you might think of National Winne the Pooh Day as a dress rehearsal for February 14. Need some Valentine card message inspiration? These quotes just might do the trick. In my opinion, the Winnie the Pooh stories have just as much meaning for grown-ups as they do for kids. Hidden within the pages are gems upon gems of poignant anecdotes and words of wisdom for adults, too.

Believe it or not, Winnie the Pooh has roots in World War I, according to Winnie the Pooh website just-pooh.com. And he was actually a real bear — but a female black bear cub.

While troops from Winnipeg were being transported to the eastern part of Canada, “Lieutenant Harry Colebourn bought a small female black bear cub for $20 from a hunter who had killed its mother. He named her 'Winnipeg', after his hometown of Winnipeg, or 'Winnie' for short.” Winnie quickly became the brigade’s mascot and went on to Britain with the unit. The once lieutenant, now captain, took Winnie to the London Zoo where she lived from 1919 to 1934.

During this time, A.A. Milne’s son, Christopher Robin, loved Winnie; she was his favorite animal at the zoo. In fact, Christopher Robin loved her so much he called his own teddy bear Winnie (originally named Edward the Bear). Thus Winnie the Pooh was born, and A.A. Milne began writing stories about the adventures his own son had with Pooh and his friends in the Hundred Acre Wood. (The other characters, by the way, were also based on stuffed animals in Christopher Robin's collection).

Clearly other folks found it magical, too, and Winnie the Pooh has been translated into almost every language, the website noted. Now everyone around the world can enjoy the magic of Winnie the Pooh, including these lovely quotes about love from Winnie the Pooh, if you can “bear” it.