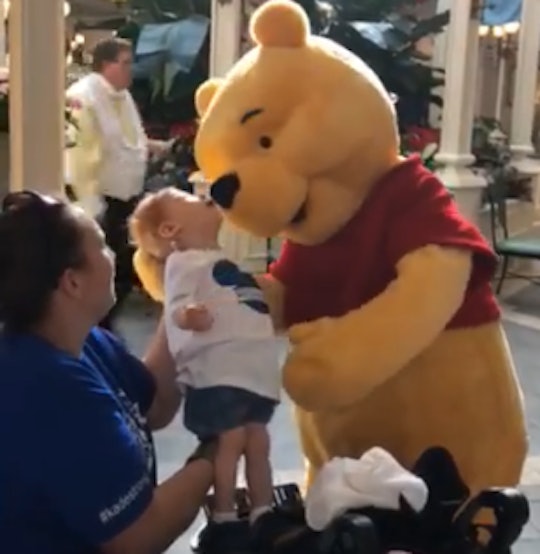 I would imagine there's a real responsibility to wearing the costume of Winnie the Pooh, if you take your job seriously at any rate. Heavy is the head that wears the crown, as they say, and so too it is with the Winnie the Pooh costume. You need to be able to pull off all of the beloved E.E. Milne character's sweet traits: kindness, patience, empathy, love. You have to remember that you are representing someone who means so much to millions of children, something bigger than yourself. And I think this Winnie the Pooh, who comforted a toddler with special needs at Disney World, takes their role seriously. Not just as a character, but as a human being.

I'm not the only one who thinks so; Jessie Barber and her wife Alison are clearly pretty big fans themselves. The couple took their 10-month-old son, who lives with cerebral palsy, to the Crystal Palace at Disney World for a special treat earlier this week. The family went for the well known character breakfast in the Magic Kingdom, where characters come around and visit diners, spending a little time with each table when they can. And in the case of this particular Winnie the Pooh, time was definitely made: A full 10 minutes of cuddling, gently touching the toddler's head and even rubbing noses as the young boy looked completely entranced.

If you don't believe in magic, folks, you certainly will after you watch this video.

Now, to be fair, this would have been a sweet moment with any child. But it was especially poignant to see Winnie the Pooh take so much time and care and attention with a little one with special needs, who sometimes might be in the position of being somewhat overlooked. As Barber noted in her Facebook post:

For those of you who have disabled children know the feel when people look but aren’t sure how to interact with your kiddo. This Winnie the Pooh melted my heart and knew exactly what to do! He spent 10+ minutes with our little guy and he loved every second of it.😍 Thank you Pooh!

I'm happy to tell you that this sweet video has been watched 26 million times on Facebook and shared more than 460,000 times as well. Because it turns out that people might actually be genuinely good and decent, and seeing a touching moment between a beloved children's character and a young boy who is clearly enchanted is exactly what everybody needed to see right now.

And let's not forget the kind human inside the costume, as several people took to Facebook to point out:

This person needs a promotion! Shout out to Pooh for being so endearing 💖💜💙

This video is a reminder of how little we need to do as humans to make a child feel seen and loved. A hug, a smile. A bit of time out of our day.

And who better to remind us of this than Winnie the Pooh?