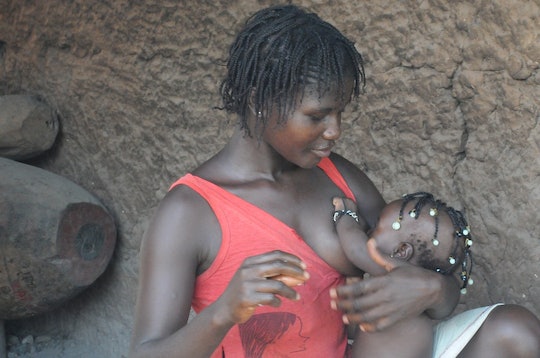 It's a common misconception that a woman's body is meant for public consumption. Whether in the form of unsolicited opinions or judgments, women are subjected to a barrage of other people's feelings about what they should (and shouldn't) be doing in their own skin. Of course this is ridiculous and damaging and something that a myriad of feminist groups have been crusading against for decades, but unfortunately the practice of judging other women for existing persists. Breastfeeding women are hardly immune. In fact, they are often more vulnerable. There are things people feel fine saying to women breastfeeding in public, and I think it's time breastfeeding moms start talking back.

The truth of the matter is that despite a collective 38 months of nursing two children, I never once got a negative comment about breastfeeding in public. The people in my life were supportive, and if they said something that could possibly be seen as anti-breastfeeding it was never done maliciously and they were more than willing to become more informed and, as a result, even more supportive. The only comments I ever got from strangers were positive, largely from self-described "old hippie" women who were, "so happy to see women nursing in public." It was really nice, honestly, and I was and remain grateful to have been on the receiving end of such warmth and positivity.

But, um, you guys? I'm snarky. Like, really snarky. More than just my admiration for a healthy dose of snark, I'm really vocal about empowering breastfeeding mothers to stand up for their rights in the face of nastiness and shame and judgment and ignorance. So, I had a lot of witty retorts all lined up just in case someone ever said something rude. I've weaned my last child and no longer have the opportunity to use any of these personally so, in the spirit of sisterhood and sarcasm, I gift them all to you. Use them wisely, use them confidently and, of course, enjoy.

More Like This
18 Instagram Captions For Pictures Of Your Kid's First Swim
17 Best Potty Training Products For Toddlers
12 Genius Floats With Canopies (& Cupholders), So You Never Have To Leave The Pool
Here’s What You Need To Know About That Viral 1960s Baby Formula “Recipe”