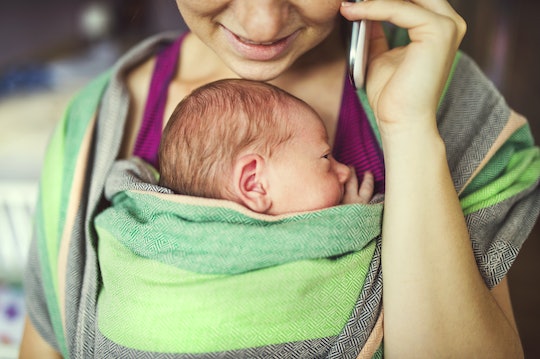 I have very distinct memories of my sixth grade computer class, where we used to have game day on Fridays. Game day involved floppy discs and computers that did not have a mouse attached. Floppy discs! Look how far we’ve come, guys! Now, we all basically have tiny computers in our pockets, and I wouldn’t want it any other way. Technology was never more important to me than it was during my first year as a parent, as there were moments my phone literally saved my life as a new mom. Before my son was born, I had grandiose ideas about never using my phone around him; about reading actual books to him while I breastfed and limiting my own "screen time" and finding other interactive forms of entertainment. How cute, right? I specifically remember one of my girlfriends, an experienced mom, nodding politely and going “Mmm-hmm,” when I told her this ambitious plan.

As I’m sure you can guess, I lasted about two and a half days before I caved and started relying heavily on my phone. Some of it had to do with the fact that our breastfeeding issues and struggles meant that it could take an hour for me to (attempt to) feed my son, and what else was I going to do when I was required to sit still and stay awake and be continually frustrated for upwards of six or eight hours a day? My little handheld device, literally, kept me sane and able to continue breastfeeding when it was difficult.

And, as it turns out, nursing wasn't the only time during my early months as a mom, where I relied heavily on my phone. Allow me to share a few a few more moments when my phone literally saved my new-mom life (or at least made it much easier):