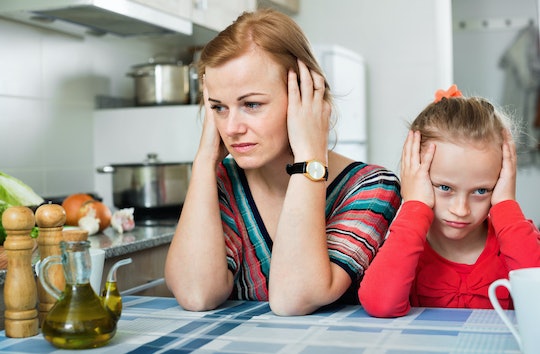 16 Moms Reveal The Most Frustrating Thing About Motherhood

When I started thinking about asking moms to reveal the most frustrating thing about motherhood, I honestly expected very different answers than the ones I received. When I personally think about what's frustrating about being a mom, I think of the annoying crap my kids pull (all the damn time) and the way society views and judges me solely on the basis of my motherhood. While I think those are totally valid things to find frustrating (as evidenced by the fact that some of the women I spoke to agreed with me), more still highlighted something that didn't even cross my mind: how little control we have over something that is so tremendously important to us.

I suppose such thoughts didn't cross my mind because, well, I try not to think about them anymore than I absolutely have to. But the truth of the matter is, I face this challenge every day in one way or another and, yes, it is tremendously frustrating. I can't physically make my son eat if he has decided not to. I can't make my daughter not be scared of the dark. I can't slow down or speed up time. It's the frustration of simultaneously being in charge of everything but in control of, well, not nearly enough. (I probably also avoided such a train of thought because, on top of being frustrating, it's scary as hell sometimes.)

So, on a serious note: fellow moms, thank you for allowing me to think of this issue in a way I hadn't really considered before. On a sarcastic but still sort of serious note: thanks for reinforcing my near constant state of fear. But really, you've helped validate my frustrations and worries with the following insights.