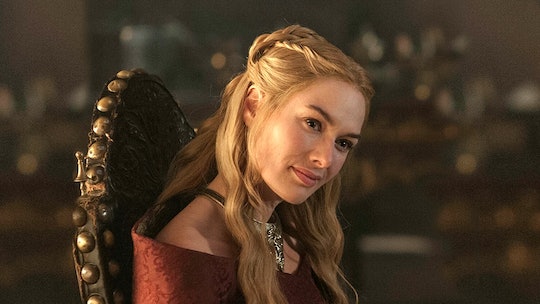 18 Signs You're Basically Cersei Lannister, For Better Or Worse

Let's get one thing clear before we go any further here. While I may be a die hard Game of Thrones fan and know all of the bad things Cersei has done, I do not condone copying a lot of her actual actions in real life scenarios. For example, sleeping with my brother is definitely not on my, um, to-do list. But the sort of badass woman power that Cersei exudes and stands for is undeniable and something I totally support there being more of in our (boring) world, far from (awesome) Westeros.

If you're a serious Game of Thrones fan, then you've witnessed Cersei Lannister née Baratheon, at her shining best and absolute worst. Need I even mention her famed walk of shame? And if living through a brute of a father, a husband who raped her on their wedding night, and a purely evil son, has done anything for Cersei, it has made her stronger.

Incest/murder/freaking insanity aside, how can we not want to be as hardcore as she is? I don't know who else can sit atop the iron throne (because yes, she has done so a few times), and look better than Cersei, in all of her smirking, non-fuck-giving glory. And the woman's hair game is just on point, for what it's worth. Even in the stills from the upcoming season of Game of Thrones, homegirl is rocking her "shameful" haircut as only she can.

There's seriously something to be said for the sheer, stone-faced boss-ness that Cersei brings to every one of her scenes. Like, sure, she may have been far from welcoming to Winterfell's sweetheart or Highgarden's princess, but I look forward to pretty much anything Cersei-centric on Game of Thrones. I mean, by now, we've all but totally given up on any happy endings for any of our Game of Thrones peeps, so why not keep our hopes high for the coolest bad bitch on the show, right?

If you're even half as awesome as Cersei Lannister — you've done your share of questionable stuff, violently love your kids, and have also developed a penchant for giving zero fucks and taking absolutely no shit from anyone — then you can appreciate that those are her best qualities to mimic...if you can pull it off, which so few of us can. Here are 18 signs you might have the soul of Cersei living inside of you (god help your enemies):