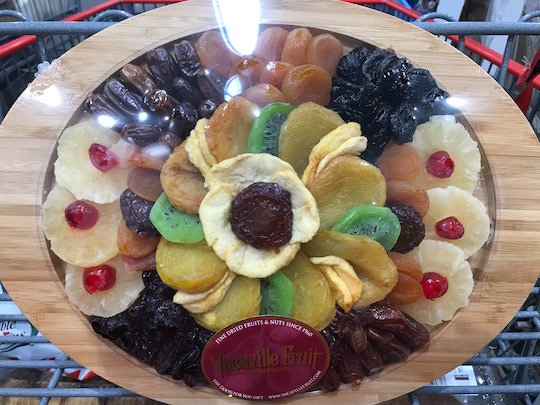 My husband sprang it on me two days ago that he was thinking of having a Halloween party for our four kids. Immediately, I went into panic mode thinking about the menu. Luckily, a quick trip to Costco assuaged my fears of having to come up with eerie apps and a spooky supper. Upon stealing a cart from another unsuspecting shopper, I sailed through the aisles past those buttery croissants and found 19 foods from Costco for Halloween parties that are plentiful enough to feed about 25 (!) hungry teens, tweens, and toddlers .

But let it be said that you’re probably not going to find traditional Halloween fare at Costco. (Meaning that the treats you spy won’t have babyish bats or grinning ghosts decorated on them.) Which I think actually makes it easier to shop for sustenance, since you’ll focus on foods that can appeal to a wide range of ages. That way, you can serve something to teens that won’t have a childish cartoon on it (which will surely get you an eye roll) and can be healthy, too. Plus, if a parent comes to pick up their kid earlier than expected, you’ll have something adult-ish to offer them as well. And that might, just might, make you the baddest witch on the block. Just sayin’.