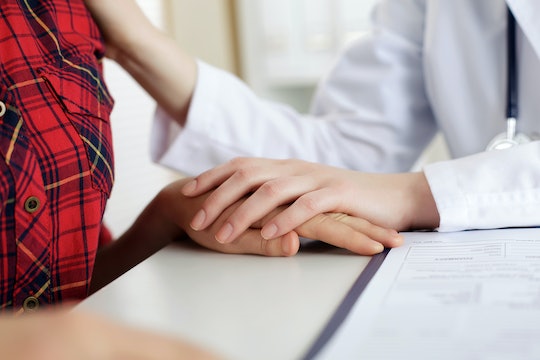 20 Moms Reveal The Worst Comments About Their Miscarriages

I have had three miscarriages. The thing about miscarriages is that, as a culture, we don't really talk about them. That isolation made the grief that much worse the first time I went through it. I longed for a connection and community with others who knew what I was going through. So, to find that, I had to tell people what I was going through. The flip side of that openness, of course, is enduring the worst things you can hear after mentioning your miscarriage, usually from the tone-deaf things people who either don't know what it's like, don't want to try to know what it's like, or don't realize that their best intentions are falling short.

My first miscarriage happened when I already had two children. I was 12-13 weeks pregnant. We took our children in for the first ultrasound and the tech, wand on my belly, said nonchalantly, "There's no heartbeat. Did you suspect it?" Um, what?! No, lady! If I had suspected do you think I would've brought my two small children in with me?! She continued, totally oblivious to my overwhelm and shock, "Yep. Looks like this one stopped growing at about 9 weeks 3 days." All I could think was Shut up! Shut up! Shut UP! I can't believe I brought my babies in here! How could I do that to them?!

When the tech ultimately realized this was not a nonchalant moment she, thankfully, stopped talking. However, the heavy silence loomed as I motioned my partner to take the kids outside and the tech never spoke or made eye contact again. She was careful not to touch me at all, as if miscarriage were contagious. I sat, frozen, in the room she wordlessly moved me to and waited for an hour alone, in silence, while listening through the wall to other pregnant people's babies' heartbeats.

I believe the only way for people to get the support that can be essential for weathering the emotional storm of a miscarriage is to continue speaking about it. However, the more we speak about it, the more horrible comments we are likely to hear. Hopefully by sharing the worst things these mothers heard after mentioning their miscarriages it will get us a little closer to a world where these insensitive things are never said again.

More Like This
A C-Section Actually Doesn't Take As Long As You Think, According To Experts
Ashley Graham On The “Fun, Organized Chaos” Of Raising Twins
These Stepmother's Day Instagram Captions Are Straight From The Heart
Stepmom Quotes & Sayings For Every Occasion