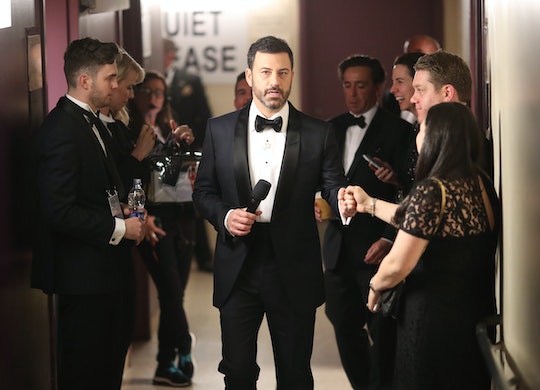 It’s almost a given at this point that if there's an award show or TV event, then there are inevitably tweets and memes to follow that typically encapsulate the event in the best way. With the Oscars it's no different, and the 2018 Oscars Tweets and memes definitely describe how a lot of viewers feel about the award show. With Jimmy Kimmel hosting yet again, it was expected that the opening monologue would bring the funny and touch on a lot of current topics and in a very Kimmel way, but the Oscars are always about making the audience laugh, even if sometimes that laughter is a little uncomfortable or unsure. And tweets and memes about the 2018 Oscars show just how much fans loved not only the jokes, but also Kimmel as the host for the second year in a row.

Even if your favorite movie or actor was snubbed and you felt like another film might have walked away with a lot more than you expected, the Oscars were still fun to watch. And much like the infamous Winona Ryder series of facial expressions from the 2017 Screen Actors Guild Awards that birthed countless memes and gifs, the 2018 Oscars have already inspired plenty of tweets and memes in honor of the night of fun and glamour.

I'd be lying if I said that the memes and funniest tweets about the Oscars aren't part of the reason why I tune in to watch each year, but no one wants to feel left out when it comes to those things.

Really, you want to be able to truly appreciate all of the commentary about an actor's acceptance speech or some other celebrity’s off the cuff comment.

Even before the Oscars aired on Sunday night, however, there were already plenty of tweets that were posted in preparation of the much-anticipated event. Tommy Wiseau, who most superfans know of The Room fame sent out a number of tweets to about someone, or literally anyone, getting both him and Greg Sestero tickets to the Oscars. Even though Sestero’s book was the basis for the movie The Disaster Artist and the movie is up for the award for Best Adapted Screenplay, it would appear that neither of the actors of the original movie were apparently invited to attend the show. So already, there was plenty of anticipation for the Oscars.

Aside from Wiseau’s efforts to get into the Oscars last-minute, which fans seemed to eat up judging by the amount of comments and retweets his many tweets about the Oscars actually got, viewers themselves were quick to tweet about a lot of the more noteworthy moments of the Oscars Sunday night, including big speeches from the night's winners.

Kimmel's monologue at the 2018 Oscars will probably be talked about for some time and his line alone about Oscar, the statue of the famous award, being "literally a statue of limitations" while adding that "that's the kind of men we need more of in this town," was definitely a memorable line.

But there were plenty of things about the Oscars that made it to the internet hall of fame. Or, you know, the land of tweets and memes to show what everyone really thought about the 2018 Oscars.

Since the Oscars is always a live event, there's a good chance that there will be some technical malfunctions or revealing acceptance speeches, so naturally, there will always be memes born from the best and most important moments of the show.

Even if you only watched to see if your favorite actor walked away with an award or to make sure that Get Out got the recognition it deserved, the Oscars still offered some big moments and entertaining ones at that.

The 2018 Oscars tweets and memes came out in full force, as to be expected, as fans ate up every minute of the three-hour-long television event.

I mean, the show always gives all of our favorite actors from across multiple film universes to interact, so what more could we hope for as fans?

But aside from the movie montages and on-point speeches, there's a lot to be said of the clothes and accessories of the Oscars, because how can you not appreciate the best of the best on that red carpet? Or, in this case, on-stage, like when Lupita Nyong’o presented an award in an amazing gold gown with glasses on, because she can make pretty much anything look cool.

One of the best things about award shows like the Oscars is easily the memes and tweets that result from so many big stars coming together in one place.

And with the many tweets and memes that stem from the biggest moments of the Oscars, viewers get to relive every moment even after the live show has ended.

Even though we all look forward to seeing which movie gets the coveted award for Best Picture, there's still so much fun in enjoying the best jokes, speeches, and dresses from the evening and as per usual, that's what fans can take away from the 2018 Oscars.