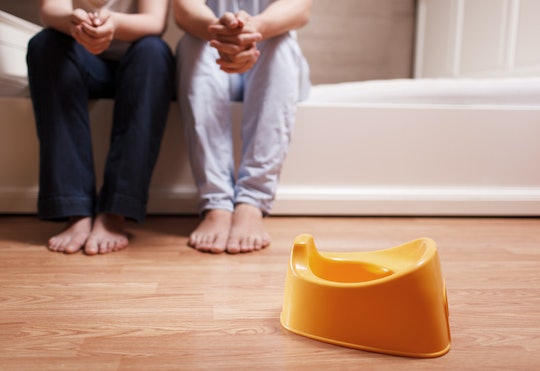 3-Day Potty Training Worked For Me, But I'll Never Be The Same Again

Given enough time together, any group of toddler moms will, at some point, turn to the topic of potty training. That's because, until they are completely toilet trained, our children's excrement is a major player in our lives. For the last few years, many parents have turned to the "three-day potty training" method, of which there are many variations. I did this with my youngest and it worked. It was amazing! Yes, three-day potty training worked for me, but that's about as complete a picture of how things actually went down as describing World War I was "a victory for the Allied Powers." Yeah, ultimately that's accurate, but putting it in those terms doesn't touch upon the horror show that came before.

Here's the basic process. Again, different programs may do things a bit differently, but these were our rules:

Day 1: Don't have anything on your child's bottom. No pants, no diaper. This runs absolutely counter to everything parents of young children have learned to be a wise decision up to this point. Pump the child full of fluids so they'll have to pee a lot. Watch them closely — usually be staying with them in a designated area — and remind them they should try to pee at regular intervals. Most guides recommend that this "no diaper" trend continue through the night and that you should wake the child by setting an alarm and making them try to pee.

Day 2: Either repeat of Day 1 exactly or, if things went well, add underwear.

Day 3: Either today will be your underwear day or, if things went really well on Day 2, add pants in the mix and maybe even dare to venture out of the house.

We did the aforementioned to try to train our first child before he turned 2, but it didn't really take. And when I say "we" I mean "my husband," who was a stay-at-home dad at the time. He did all the research and all the work and I just sort of encouraged and supported him as best I could. I can't exactly tell you how "we" got it to stick more than a year after the initial attempt. I had a newborn at the time, and it was all kind of a blur. I seem to remember M&M rewards and regulated liquid intake and sticker charts. I also remember it sort of happened gradually over time.

So when our daughter started showing signs of being ready (namely waking up in the morning with a dry diaper) I really had no idea how to begin. I felt like a first-time mom.

The idea of potty training can freeze the blood of even the most proactive and stalwart of parents. It's really hard. I mean, just think about how you would even begin to describe the physical sensation of having to go to the bathroom (like, as an adult) and how to control your body to prevent yourself from going before you reach the bathroom. Now try explaining that to an irrational, verbally limited child (who, by the way, is very happy to keep pooping their diapers, thank you very much).

So I turned to the one method I did know: three-day potty training. Even though it hadn't really worked the first time around. Even though my husband had told me it's incredibly frustrating. Even though I was hellbent on remaining realistic in my expectations. I didn't feel I had any great alternatives, so I dove in.

You wake up that day full of enthusiasm and a laissez-faire attitude about body fluids. "The kid is going to have accidents," you tell yourself. "That's fine. It's pee and poop. You know how to deal with those. You've been doing it for a while now."

This is naive and stupid.

Because, yeah, it's all true (and it is, despite being naive and stupid, the best way to approach this whole gross process) but until you spend a whole day of watching and waiting for a toddler to piss all over everything you love, you cannot know how it wears down your very soul. You cannot understand the frustration of staring at them all day long, trying to discern what's happening inside their bodies only to turn away for a second — a literal second! — and discover them making wee-wee on the couch.

After a while, I thought it would be a good idea to cover my living room carpet with towels. Do you know where my daughter peed after I did that? In the one spot where there was a gap between two towels.

When she did make it to the toilet, I was ecstatic. I never thought that my life would bring me to a place where I was literally cheering for a turd, but here I was, clapping and speaking in a register three octaves higher than usual. Even when she sort of made it to the toilet, I had to cheer and clap and try to make the smile reach my eyes. You know, to encourage her.

Finally, it was time for her to go to sleep.

"No diaper at bedtime, either!" the manual insouciantly reminded me.

Because after cleaning up five accidents for every half victory; after watching my child destroy my possessions with urine and feces; after being drenched in body fluids, I wasn't going to screw up the fact that she slept through the night (finally) by waking her up just in case she had to pee. (Especially since she usually woke up dry anyway.) If this screwed up her night training, f*cking fine, bro. I'd rather deal with another 16 years of wet diapers once a day than throw off an amazing sleep schedule.

Not today, Satan. Not today.

You wake up and, within minutes, remember where you are and what you have to do. You remember yesterday. You pray for death. It does not come.

You don't have time to dwell in self pity. In fact, no dwelling allowed. You have to carry on today as though yesterday never happened. You have to keep up that same, serene, chipper attitude. You had to be Mary Poppins, even though you feel like Miss Hannigan from Annie, questioning all your life choices and moaning about how awful little girls are as you drink bootleg gin on the edge of the bathtub.

Even if your child shows moderate progress, as mine did, you begin to crack. Did you know there's a scientifically defined number of times a person can clean up poop from a carpet before they start crying? It's four. I know because it happened to me.

Oh, and remember friends: this all happens in one confined area. In my case it was one small room, which happened to be my small living room and smaller kitchen. Things are a goddamn mess, and you have no choice but to either stare at it or accept the fact that, if you clean it up, the room will be destroyed again in approximately 45 seconds. So it was there, amid a day and a half's worth of pee and poop stains, half-eaten meals, toys, a sink full of dishes (who has time to do the dishes in times like these?) and random household detritus that I picked up my garbage can and sobbed to my husband. "Why don't I just dump it? Because I may as well. We're disgusting garbage people now. We are never going to be able to have nice things. All I want is some things that are nice and don't have piss on them!"

The stir-craziness really sets in around this point. You're bored, you're restless, you're tired, and you're done. Everything smells like pee. And I love my children, but no one loves watching their child's naked bottoms, wondering when it's going to explode like a urine volcano.

And your child doesn't care about your suffering, like, at all. In part, I'm sure, because they're not seeing your suffering: you don't want to discourage them so you writhe in agony quietly and out of sight. So your kid is like, Little Princess Sh*tter, imperiously above your petty mortal concerns. They are in charge, living their best lives. You are but their subject.

But then something happened: she started walking to the potty. Even when I didn't tell her. By the end of the day, her last several bathroom visits had been self-prompted and largely self-sufficient.

But the preceding day and a half had destroyed my soul. I couldn't take any joy in it. I was too defeated. I felt, for sure, this was just the Universe trying to trick me into thinking I could be happy again one day. But I knew better. I knew it was a sham. We live as we are born — naked, screaming, and drenched in body fluids — and that is how we die.

Day Three: A Light At The End Of The Tunnel

You wake up assuming the worst. The fact that the second half of yesterday was good must mean that her diaper leaked in the night. There's no way, none, that you could possible have gone that long without pee getting on something that had to be cleaned immediately.

I didn't smile, but I didn't feel anything deep inside of me breaking or even cracking. "This is good," I thought. "The absence of existential pain and dread is good."

The morning continued in the same manner, but it wasn't until about 10:00 a.m. that I allowed myself to believe that maybe, perhaps, it was time for her to try it with some underwear.

She'd chosen Star Wars and superhero panties. I tore open the package as she literally vibrated in happiness. This prompted the first time I actually smiled in days. She ran around showing everyone her cool new big girl undies. My smile became wistful and pessimistic then. "I give it 10 minutes before I have clean something," I thought.

But, by God, she kept them dry for most of the day. Long enough, anyway, for my spirit to be revived and for me to take an accident in stride.

She went to bed with that damn diaper, though. Because I just wasn't ready to deal with everything I'd dealt with in the middle of the night just yet.

Most of the three-day guides will tell you that a child may well not be completely potty trained in three days but, rather, that they will have all the skills the need to move forward and will just need refining and practice. They will also tell you that accidents and regression are normal. But my daughter was well and truly potty trained in three days just around her second birthday. She's 3.5-years-old and in the she has only a handful of accidents. This is not a humble brag, as I honestly take zero credit. Like so much of parenting, I think it has to do with luck, and I just lucked out. Clearly, the method was a good fit for my kid, who was also apparently blessed with a certain body awareness and control that makes her good at holding it until she gets to the toilet.

But I didn't say she was potty trained for a month. It took that long for me to overcome the psychological horror of three-day potty training and believe that, yes, it had worked. The fountains of pee and unexpected poop ground into the floorboards were no more. Her bowels, magically, had been tamed.

But at what cost?

OK. Real talk? In retrospect it's not all that serious. But in the moment it's pure, unfiltered, poop-filled hell. Honestly, I'd recommend this to anyone who wanted to give it a go. Because, I'm pretty sure, in talking with the aforementioned other toddler moms, that there is no way to potty train a child that will not result in a little piece of your humanity dying a painful, gasping death.