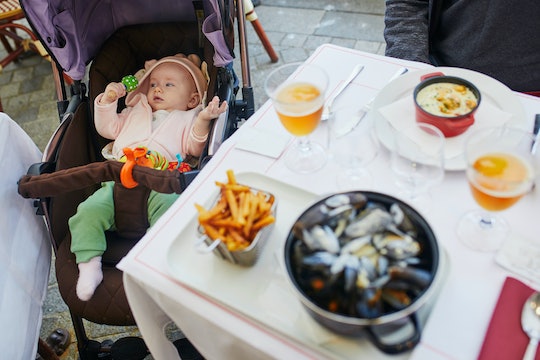 These 5 "Foreign" Parenting Practices Are Definitely Worth Trying

Oftentimes with parenting, we're so attuned to the routines and rules of our own culture that we forget not everyone in the world thinks babies must be soothed in glider chairs and sung songs about being rocked in cradles perched inexplicably in treetops. Sometimes, we don't really stop to think about maybe doing things... differently. But the truth is, there are many "foreign" parenting practices Americans should adopt.

To be honest, I can get a little annoyed by all the books espousing how awesome other countries are at parenting, and how lazy/unhealthy/overly-protective American parents are. As if we do nothing but spend our days shackling our kids to our ankles, maniacally adding apps to their iPads whilst occasionally spritzing them with Cheeto dust. (I can attest that we only do that on weekends in our home! Ba-dum-bum.)

For real though, there seem to be so many books about how in places far from the United States, toddlers love nothing more than sitting down to a long, quiet dinner of duck confit and a fine Bordeaux. Or how in some countries the parents let their kids play in old mine shafts filled with band saws, and it teaches their kids strength and self reliance! Not like our playgrounds with their protective padding... In other parts of the world there's none of this silly crib business! Parents put their infants in old Ikea boxes, outside, in -20 degrees, and not only do their babies like it, they also sleep 14 uninterrupted hours and then wake up able to discuss economic theory.

Okay, maybe I'm being a little touchy. But as moms, we are so constantly barraged with worries that we are doing things wrong, that it can sometimes be hard to take in new parenting ideas. But really, we should stay open! Because the truth is, there really are many other parenting styles out there that it would behoove us to take a page from.