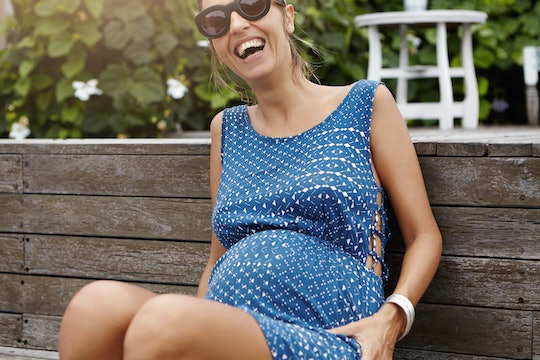 Yes, The First Trimester Is Harder Than The Second In The Summer

Being pregnant during the summer is hard. When I was pregnant with my first child, I suffered from hyperemesis gravidarum (HG) — a chronic condition that resulted in constant vomiting, nausea, and even hospitalization — and the heat of that New York City summer made it all too much to bear. So while it might seem counterintuitive, my first trimester was the hardest in the summer. Yes, it was even more difficult than my second trimester.

Obviously, my experience is not the same as every other pregnant person's. Perhaps the second trimester will be the easiest for you, even when you're in the thick of those hot, muggy, garbage-smelling summer months. But for me, the first trimester was by far the most difficult trimester to endure, and I'm so thankful I made it through despite the HG and scalding summer nights. While it might not be obvious to people, because one usually doesn't have a big, protruding pregnant belly in the first trimester, pregnant people in their 8th, 9th, or 10th week of gestation are miserable! Especially when it's 90 degrees and you're sweating from places you didn't even know you could sweat from.

Again, no two pregnancies are alike. But I know I'm not alone, either. Other pregnant people find the first trimester harder than the second during the summer, too, and it turns out there are five distinct reasons why: