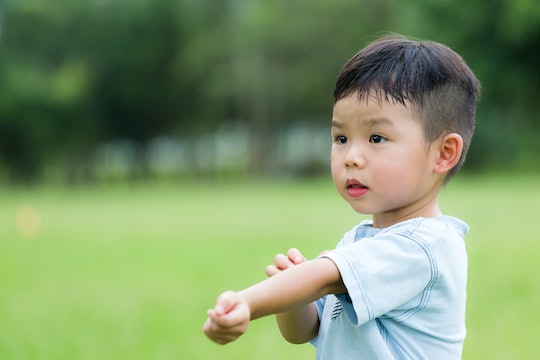 5 Reasons Why Your Kid Is A Mosquito Magnet, According To Science

Mid-September is a weird time of year for weather: not quite as brutally hot as the dog days of summer, but not yet time to dig out the fall sweaters, either. Where I live, it's still warm and humid, which means the mosquitoes are out in full force. And everywhere I look, including my classroom, kids are miserably scratching at the welts on their arms and legs. Some children seem to be more prone to mosquito bites than others, and scientists are finding that it's true: The pesky critters are most attracted to certain, um, "lucky" folks.

In the mosquito world, it's the girls who rule: Females are the only mosquitoes that bite, because they use a protein in human and animal blood to develop their eggs, according to the University of Florida entomology department. As the lady bloodsuckers feed, they release saliva into the skin that causes the familiar allergic reaction of itching and swelling. But mosquitoes are actually picky about the victims they choose; they're attracted to certain sights and smells more than to others. An estimated 20 percent of people are "high attractors" for mosquitoes, University of Florida medical entomology professor Jonathan Day told NBC News.

My family may be among them; my husband can get eaten alive just from 10 minutes in the yard, and one summer, my daughter's legs were so covered in scabs that she looked like an accident victim. If you're feeling my pain, read on to find out why some kids become the Catch of the Day on the mosquito menu.