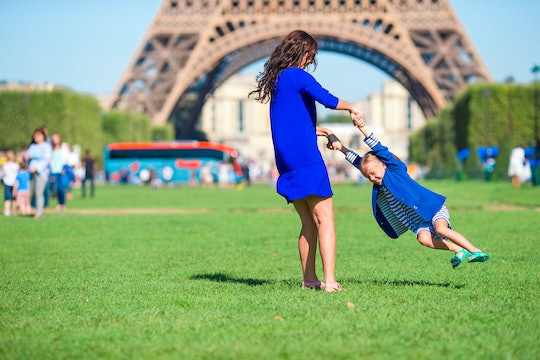 To me, everything's better in French. Words tend to sound more romantic in French. Croissants are more indulgent than their bland American muffin counterparts. French lingerie is more delicate and lovely than the stuff you might find at Walmart. So, it honestly doesn't surprise me that the French have the upper-hand when it comes to parenting, too. There are a lot of things that French moms do that American moms should try because, well, it at least looks like they know their sh*t. Their kids seem to eat a wider variety of foods, they tend to be better behaved, and their babies sleep through the night earlier.

More Like This
18 Best Sand Toys In 2021 For Babies, Toddlers, & Kids
Vaccinated People Can Ditch Masks. Where Does That Leave Kids?
The 7 Best Water Tables For Your Little Ones
The Best Splash Pads For This Summer

I've been enamored with everything French since studying abroad there in college. I didn't live a glamorous existence while there; instead I stayed in my "Maids Room" the size of a closet at the top of the sixth floor of an apartment building in a sketchy neighborhood. I shared a toilet with several other people on my floor (and a bunch of strange looking bugs), so I wasn't doing France like Carrie Bradshaw in Sex And The City. Still, I fell in love with the French way of life, and took note of the sometimes subtle, but usually obvious differences between the French and Americans.

The family from whom I rented my room seemed to have the most perfect (four) children. I observed what they did because it was so different from how I was raised, and I guess I filed it for later (when I would eventually have my own children). Of course, not every French family is the same, so what I observed should in no-way be taken as "gospel of French parenting." I was just lucky enough to be in a French home with French parents and French children, learning from (who I consider) to be the best of the parenting best. In fact, when I had my first son I chose a French pediatrician with a rather off-the-beaten-path philosophy when it came to a lot of parenting advice. For the most part, I dug what he had to say because it felt so very, well, French. Unfortunately, once I passed the baby stage, I wasn't able to hold onto "the French way." Still, there are a lot of things from the French Parenting Playbook I would like to make more of an effort to try. Vive la France!