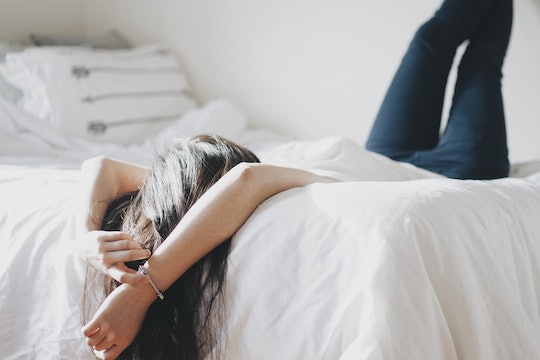 Although feminism as an overall concept is gaining in widespread cultural popularity, and the stereotypes society has long attached to feminists are (slowly, painfully) lessening in intensity, there are plenty of clichés that feminist women (and men) are still being forced to either destroy, or subtly circumnavigate. "Does shaving make me a bad feminist?" or "Does becoming a mother make a bad feminist?" are questions women are asking themselves, as we're continually hyper-aware of what specific labels say about us as human beings.

But the truth is, adhering to or trying to force yourself into certain characteristics that people think are feminist, isn't feminist at all. In fact, it sounds a lot like trying to fit into socially constructed notions of womanhood, femininity and/or masculinity, in order to embody specific gender qualities that society has long tried to convince us will "make a man a man" and "make a woman a woman." I mean, it's all bullshit really. Which is why shaving doesn't make you a bad feminist, and having children doesn't make you a bad feminist. A working mom can be a feminist, a stay-at-home mom can be a feminist and, yes, a father can be a feminist.

The bottom line is, there are almost no aspects of a person's identity or hobbies, habits, or preferences, that undermine someone's ability to be a feminist. And this holds true when it comes to sex. For example, a feminist can, without a doubt, be sexually submissive. The idea that a feminist is dominant in the bedroom is another aging stereotype, used to pigeonhole feminists into the man-hating trope of old. You don't have to put out cigarettes on your partner's tongue (or even be a fan of woman-on-top positions) to be a feminist (but hey, if you and your partner are into any that, no judgement here).

So with that in mind, here are 6 reasons why being submissive in bed doesn't make you a bad feminist. Stereotypes are for the birds, and good sex is for those who aren't held back by notions of what their preferences might say about them.