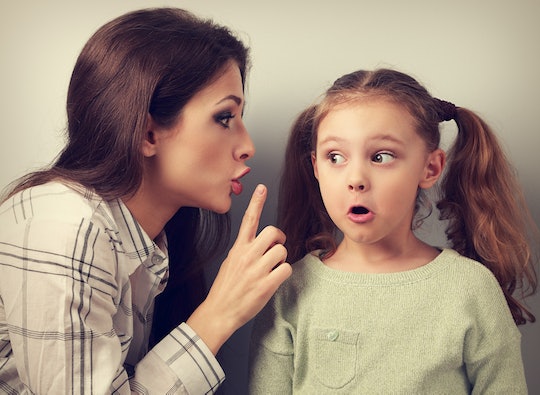 7 Basic Rules For Swearing Around My Kid

The late and incredible George Carlin once said, "Why should I deprive myself of a small but important part of language? Why not use all of what we’ve developed to communicate with?" I agree. Swear words are part of our beautiful, vast language. Why must I sensor myself and change my style of communication just because I suddenly had children. I've already given up some of my identity for these little humans, so why this? For what benefit, exactly? However, my husband and I do have some basic rules for swearing around our kids.

I've been swearing since I can remember. In high school I wrote a note to a friend and in that note I used the word sh*t. Of course the teacher found the note and gave me a detention for using a curse word in a note which, by the way, wasn't even meant for her. I spent an hour respectfully defending my right to use a curse in my own writing, all to no avail. That was one of my first run-ins with how harshly our society judges those who curse. Luckily, I don't give a sh*t.

I actually truly enjoy the power of profanity. I love effortlessly intertwining those little swear nuggets into eloquent prose, the way they feel as they gloriously roll off the tongue, and the effect they have on mundane conversations. While I do not give swearing much thought, since it's so deeply ingrained into my language, I realize I curse for various purposes. Sometimes I curse for emotional effect, other times it's due to pain, for a laugh, and even to purposefully offend. Sometimes I curse just because I like it.

Although I've heard countless times that cursing is crude and unladylike and that those who curse obviously lack intelligence and vocabulary fluency, I never bought into that sanctimonious propaganda. I prefer studies that support my point-of-view, like the Marist College one that concluded people who curse are actually of higher intelligence than those who do not. In fact, their research found that "a voluminous taboo lexicon may better be considered an indicator of healthy verbal abilities rather than a cover for their deficiencies." The study goes on to say, "speakers who use taboo words understand their general expressive content as well as nuanced distinctions that must be drawn to use slurs appropriately. The ability to make nuanced distinctions indicates the presence of more rather than less linguistic knowledge." So there.

Carlin also said that people "who choose to deny that part of our language have limited themselves. And that’s fine; that’s good. Good choice over there…but I’m just fine over here." Exactly, Mr. Carlin. I'm completely fine with how I speak, and everyone has the right to their own choices in terms of language. It's just that, when it comes to my kids, we do stick to the following rules. For now, at least.