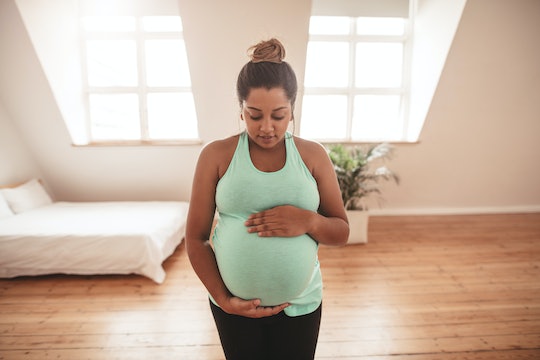 Things get weird when people start having conversations with your pregnant belly. Sometimes people will have whole interactions with your belly and forget to even greet you, like you as a person, and not as a carrier-of-child like a character in The Handmaid's Tale. Worst off, the simple act of sporting a bump seems to ignite a burning desire in people to say some stunningly crazy things. In fact, the creepy things people feel fine saying to pregnancy bellies are things I would love, and I mean love, to forget.

When this happened to me during my two pregnancies, I was forced into playing the part of "seer," like Whoopi Goldberg in the movie Ghost. Which meant that for every part of the conversation where the baby was expected to be talking back, I found myself speaking on behalf of my baby or in my baby's "voice" just so that the other person wouldn't think that my baby was being rude. "He's feeling a bit shy today," I'd say, by way of explanation as to why my fetus son wasn't saying hello.

Other times I had entire conversations where I remained a silent observer, but my "baby" had plenty of things to say about how he had slept the night before, how much he enjoyed kicking his mom that morning, and how he smiled for the camera at his mom's doctor's appointment. This is how far I will go to please people. Even strangers. Inside, however, I am slowly dying. The people talking to my belly, on the other hand, had no idea how I was feeling because they kept right on saying creepy things to my belly, including the following: