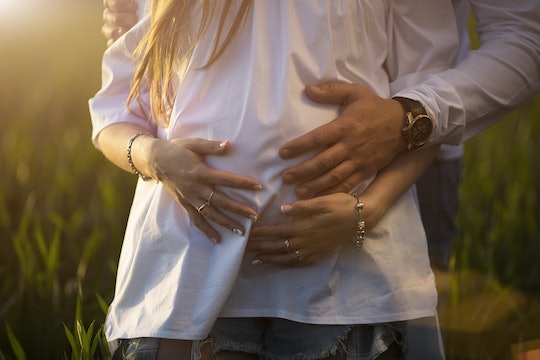 Parents usually don't mean to add to your pregnancy misery, they just do. For example, when you're hovering over a toilet for the entire first trimester, they're busy enjoying a nice, juicy burger. When you're drowning in third trimester hormones, your partner thinks their so-called "jokes" are hilarious and not, in fact, annoying AF. And because there's a middle ground sandwiched between the two hellish bookends that is the beginning and end of your pregnancy, there are some honestly sh*tty things your partner will do when you're in your second trimester, too. You know, just because.

My second trimester, with both children, was the rising sun after the first trimester storm. It was also a very necessary breath of fresh air before the third trimester reminded me how hard pregnancy could get. Basically, the second trimester was a time I could sort of enjoy the pregnancy and see it for what it really was: my body doing something incredible and not, you know, turning against me. Food didn't make me want to vomit as much as it had before, my energy returned, and I wasn't at the inevitable point in my pregnancy where everything hurt. Some might even say I had that "glow."

Inevitably, though, my partner did some things that disrupted my second trimester joy. He's a pretty easy going guy, passive by nature, and he definitely doesn't let much get to him. Normally I'd say that's nice, or whatever, but when I was pregnant this behavior was annoying. I wanted him to care more about things — like which set of onesies we should buy — because every decision during that highly escalated, hormonal time, was an important one. And couldn't he just let me enjoy the entire pizza without a comment or smirk? Let me live, dude! With that, here are some other things your partner might do at the mid-point of pregnancy that are pretty sh*tty: